I have just recently had solar pv installed, mainly to future proof my energy costs, I do not expect it to be like drilling for oil in my back garden, however the return looks to be encouraging.

The install gives you another single unit meter, from this you will see the total amount the panels produce, but that is about it.

I wanted to know how much the production was as it was happening, I discovered the light blinks on the front of the meter will flash 1000 times for each kWh of electricity which passes through. The rate of the flashing of the LED tells you how much power is currently passing through the meter.

Being a newbie to Arduino, I knew that this could be done, but did not know how!
After web searching I found many sketches that would have helped me, but they were for Data logging, a step that was too far for me at this time, but I did find the diagram on how to use AnalogRead.
I thought of just a row of LEDs that would illuminate in correlation to the amount of output the LDR was reading, like a VU meter. 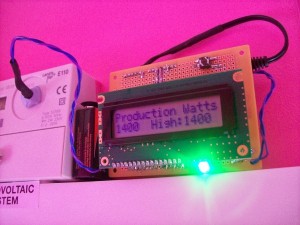 So I thought about it another way, what was I doing?  I am measuring a pulse and then stopping the measurement when the pulse occurs again, with those results I could then find stuff out.

My eureka moment was looking on the net again, this time for lap counters and timers! there were plenty and very simple.

The most understandable one I found was Claudiu Cristian’s Speed measurement with arduino with his code I began to set up my circuit and use a flashlight to experiment with some settings, changing when the LDR started to count was first, I n effect I needed to turn the  < and > inside out to count what I needed, as it would measure only when the light was on otherwise.

His sketch uses two LDRs on the premise that a car passes over LDR 1, starts a timer then passes over LDR 2 then grabs the timing and divides it by the distance to calculate speed.