Ever wanted to be “logged in” to your AVR microcontroller? Ever thought it would be cool to “cat” a register to see its contents? Have you always wanted a way to power up and power down individual peripheral sub-systems of your AVR or Arduino in *real time* ? Me, too, so I wrote the AVR Shell, a UNIX-like shell.

It’s UNIX-like because it’s reminiscent of the shell account you went out and bought to run your irc nick collision bots on, as well as having a command or two in common. It also has a filesystem that resembles UNIX extfs, using an external EEPROM, but that’s become a project unto itself so I’ll be releasing that module separately under a different instructable when it’s production-ready. 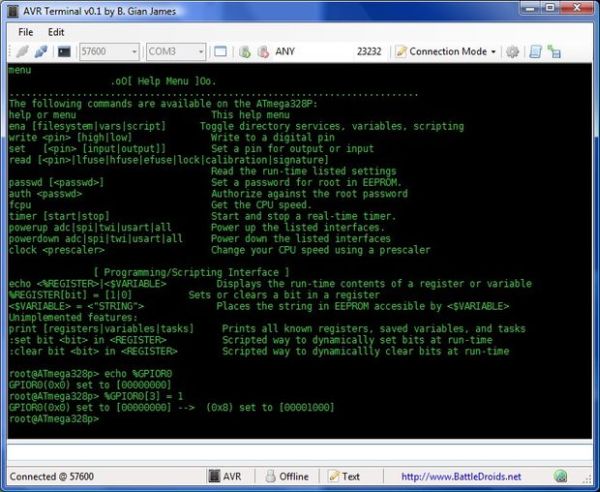 Here’s a list of the things you can currently do with the AVR Shell:

This instructable will walk through the installation, use, and customization of avrsh.

This instructable doesn’t require much except that you:

To install the AVR Terminal, just unpack it and run it. To install the AVR Shell firmware, download it and either directly upload the hex file and connect your serial terminal at 9600 baud, or compile it yourself with “make” and then “make program” to upload the hex. Note, you may need to change the AVRDUDE settings to reflect your COM port.

Note: The PROGMEM attribute is broken in the current AVR GCC implementation for C++ and this is a known bug. If you compile it, expect to get many warning messages saying “warning: only initialized variables can be placed into program memory area.” Besides being annoying to see, this warning is harmless. As C++ on the embedded platform isn’t high on the AVR GCC priorities list, it is unknown when this will be fixed. If you check out the code, you will see where I have made work arounds to reduce this warning by implementing my own attribute statements.

Pretty simple. Download and install anything that you might need to then flip the page and let’s get crackin’.

The AVR Shell was written primarily to access some sensors that I had connected to my AVR. It started with a simple LED then moved to light sensors, temperature sensors, and finally to two ultrasonic transducers. avrsh can set the digital components of these sensors by writing to the registers that control them.

Manipulating AVR registers while running
To get a list of all known registers on your Arduino, type:

Fuses are special types of registers. They control everything from the clock speed of your microcontroller to what programming methods are available to write-protecting EEPROM. Sometimes you will need to change these settings, especially if you’re creating a stand-alone AVR system. I’m not sure you should change your fuse settings on Arduino. Be careful with your fuses; you can lock yourself out if you set them incorrectly.

In a previous instructable, I demonstrated how you can read and set your fuses using your programmer and avrdude. Here, I’ll show you how to read back your fuses at run time to see how your MCU has actually set them. Note, that this isn’t the compile-time setting that you get from the definitions in <avr/io*.h> but the actual fuses as the MCU reads them at run time.

From Table 27-9 in the ATmega328P datasheet (databook, more like it) the bits of the Fuse Low Byte are as follows:

An interesting thing to note is that with fuses, 0 means programmed and a 1 means that that particular bit is unprogrammed. Somewhat counter-intuitive, but once you know it you know it. 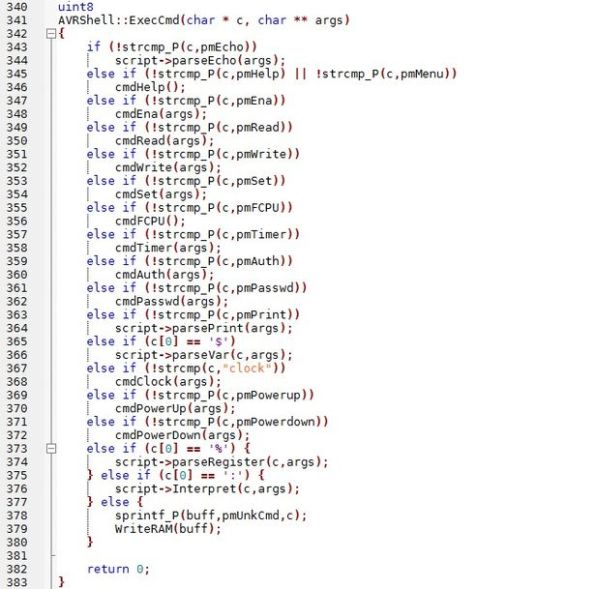 When you read your fuses, it will be returned to you in hexadecimal. This is the format that you need if you want to write the fuses via avrdude. On my arduino, here’s what I get when I read the lower fuse byte:

So, all bits are set to 1. I did the same procedure on an Arduino clone and got the same value. Checking one of my stand-alone AVR systems, I got 0xDA which is the value I had set some time back when configuring the chip.

The same procedure is used for checking the High Fuse Byte, Extended Fuse Byte, and Lock fuses. The calibration and signature fuse bytes have been disabled in the code with an #if 0 preprocessor directive, which you can change if you feel scrappy.

For more detail: AVRSH: A Command Interpreter Shell for Arduino/AVR.