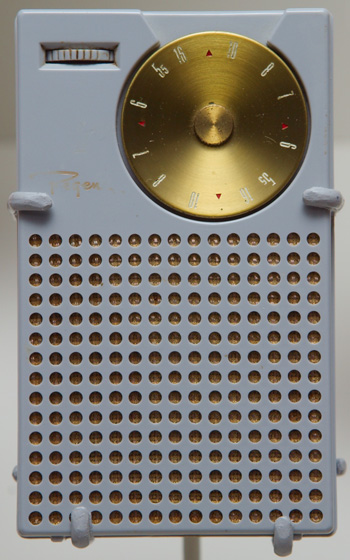 Texas Instruments announced plans for the Regency TR-1, the first transistor radio to be commercially sold, on October 18, 1954.

The move was a major one in tech history that would help propel transistors into mainstream use and also give new definition to portable electronics.

TI was producing germanium transistors at the time, but the market had been slow to respond, comfortable with vacuum tubes.

However, the use of transistors instead of vacuum tubes as the amplifier elements meant that the device was much smaller, required less power to operate, and was more shock-resistant. Transistor use also allowed “instant-on” operation because there were no filaments to heat up.

As to mobility, the typical portable tube radio of the 1950s was about the size and weight of a lunchbox, and was powered by several heavy, non-rechargeable batteries. A transistor radio could fit in a pocket, weighed half a pound, and was powered by a single compact 9V battery. (See TI photo on right.)

With these pros in mind, TI’s executive vice president Pat Haggerty “decided that the electronics industry needed a transistor wake-up call and that a small radio would provide it,” according to TI’s Web site.

Haggerty decided TI would develop the transistor radio business and the company’s semiconductor products division took on the challenge of developing a method for mass-producing germanium transistors.

In the spring of 1954 and with a prototype in hand, TI searched out an established radio manufacturer to develop and market a radio using its transistors. TI soon partnered with the Regency Division of Industrial Development Engineering Associates (IDEA). The “transistor radio apparatus” was patented by IDEA’s Richard Koch in 1955. You can view the patent and schematics here.

Prototype transistor radios built prior to the TR-1 required manually selecting and matching electrical components to make them work, which in turn created a prohibitive cost per unit for large-scale production. Koch designed a feedback circuit that accommodated the tolerance of production-run components and let them be soldered directly into the boards without manual selection.