This is a quick guide on how to use an Arduino© to control whether a cooling fan and a heater is turned on depending on the detected temperature from a TC74 Arduino sensor.

This is for a final project for an Electronics class I am currently taking, though I came into this project with pragmatism in mind, because of the hot summers and cold winters (ok, 60 degrees indoors is cold for me, but that’s probably because I’m Californian).

Working on this project should give good hands-on practice in working with the Arduino, soldering, and general circuitry, as well as coding for the Arduino and workin gon the logic needed for the coding.

Why adjust the fan and/or heater if the Arduino can do it for you?  (Ok, this is probably easy enough to do, but making it technologized (not a word) is just much cooler (no pun intended).

Also, there is a video at the end of this Instructables if you’d like everything described verbally. 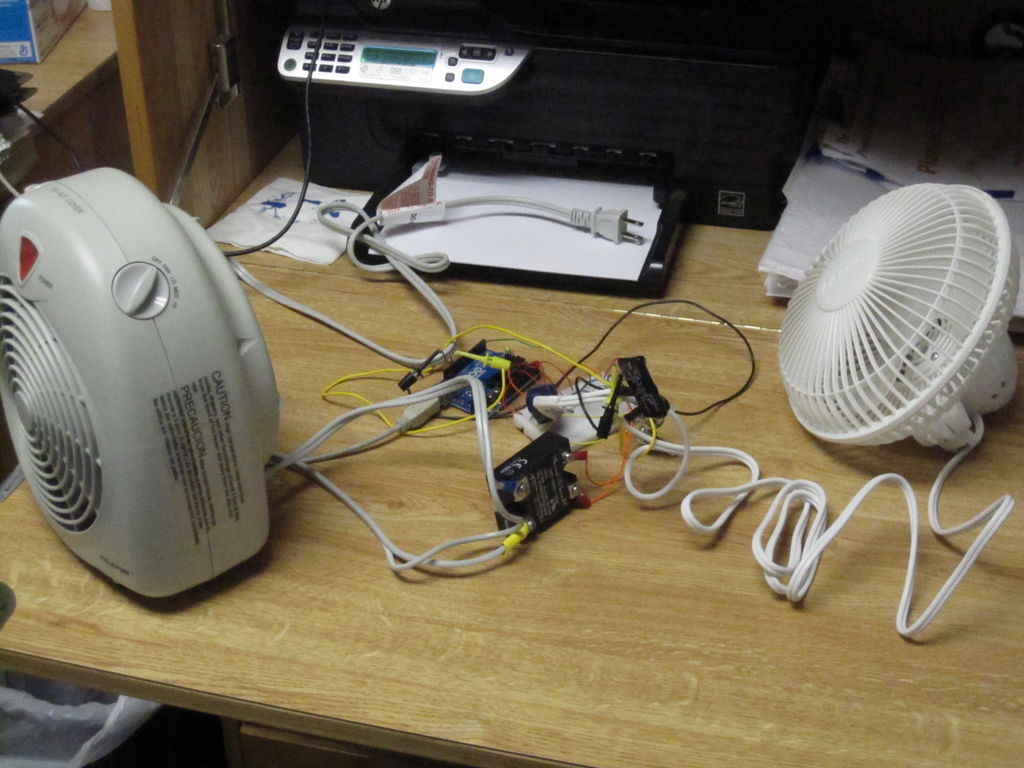 Safety warning:  Live wires may be dangerous, especially when either the fan or heater is plugged in.  Please either use the heat-shrink tubes to cover these up or better yet, box the whole contraption.

Unpack the fan and heater.

We’ll start with the fan, as this poses less fire hazard (the heater pulls a lot of current).

We wish to make a closed current loop through the solid-state relay, 120 V AC and the fan motor itself.  Basically, we want to be able to put in zero volts somewhere such that the fan is told to turn off and when we give in 5 V somewhere, then the fan turns on.

After this is done, we can test the fan to make sure that it’s talking to the Arduino.

Use any digital output pin you want, but I chose pin 13.

For an easy pin 13 on/off program…

Go to Files -> Basics  -> Examples -> Blink when your Arduino software window is open.  (This is conveniently pointed at pin 13.)  Don’t forget to plug in the fan into a 120 V AC plug or the equivalent.

1.  Unpackage the fan.
2.  Make a cut across half of the wire to expose one end.
3.  Solder the two ends of this wire to the two ends on the solid-state relay’s AC side.
4.  Heat-shrink tubing should cover this connection.
5.  Hook up the two other leads (+ and – 3 to 28 V DC) to the Arduino at pin 13 and ground, respectively.
6.  Upload code and watch your fan work!

Step 2: Setting up the heater

Set up the heater in a similar fashion.

1.  Cut to half the heater’s cord and pull the wire apart to create two open ends.
2.  Use the other solid state relay (heavy-duty) by screwing down the ends of crimped wires to ensure contact.  Do the same with connections to the Arduino on the 3 to 32 V side.
3.  Plug into Arduino at pin 4 and at ground.
4.  Upload code, and hopefully the heater should work!  (Use a similar code as the fan code, but switch the pin to pin 4.

Note:  Make your incision close to the fan.  This will leave lots of cord length for the plug to be further away from all the wires set up.  Do similarly with the heater.

Usage of the TC74 can be found at this Instructables page.
http://www.instructables.com/id/Arduino-Temperature-Sensor/

In short, hook up the TC74 as such.  (From the side of the inscription.)

Pin on far left, nothing
Second pin to Analog 4
Middle pin to ground
Fourth pin to Analog 5
Far right pin to 5 V (from Arduino, may be hooked via the breadboard)

The TC74 uses the Wire library for the Arduino.

The code is as follows, and can be modified to fill in other needs.

void loop()
{
Serial.print(“temperature in Celsius: “);
//let’s signal we’re about to do something 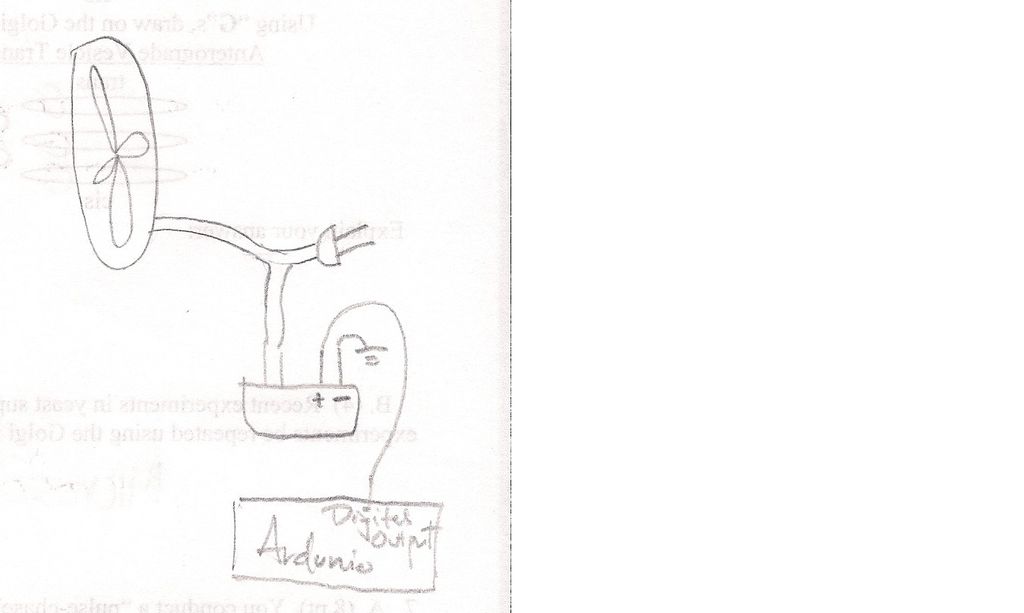 Note that the code submitted by nadav at http://www.instructables.com/id/Arduino-Temperature-Sensor/step4/Code-Code-and-more-code/ is for the old version of Arduino, hence the changes of Wire.receive and Wire.send to Wire.read and Wire.write.

What this program should do is, provided that you set some threshold temperatures, converts the fahrenheit temperature reading from the TC74 and sends it to the Arduino, where the Arduino determines whether the value is high or low enough to trigger the turning on of the fan and the heater.  It will then wait another 5 seconds before taking another reading and figuring out whether the reading has changed the digital state of the system.

Note that we cannot control when the heater and fan turn on yet.