In this instructable, I will show you how to make a simple Simon Says Game using an Arduino. it’s not just simple but we can get a psychological benefit. I have a bad memory to remember something fast or a new things. So this project really suitable for someone like me. hahaha 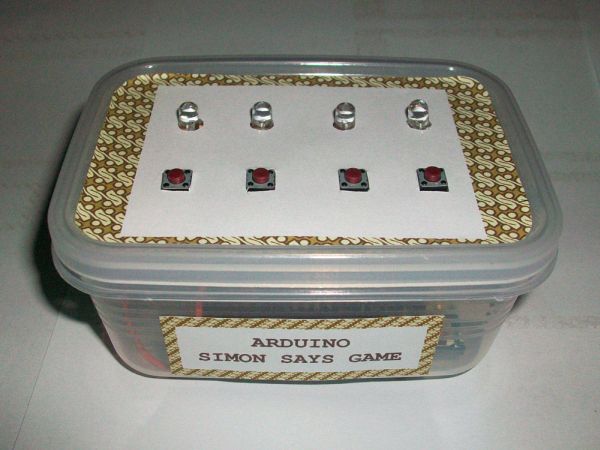 We’re gonna using some basic electronics built on top of an Arduino. When the project is finished you will have a working simple circuit that fun to play.

Tools:
– Soldering iron
– Solder
– Hot glue
– Mini drill
– Pliers
– Cutter
– Helping hands (if you don’t have it, you can build it from my helping hands instructable )

Step 2: Making the circuit on breadboard

Let’s build it on breadboard first. First, lets put the components on a breadboard so we could see how it worked and how to fit it onto the perfboard. The circuit diagram was made with Fritzing.

Step 1
Put the buttons on breadboard.  We’re gonna tie one lead of the buttons directly to ground. The other lead will be wired to the Arduino’s Digital pins 2, 3, 4, and 5.

Step 3
Add 330 Ohm resistor and put it inline with the Anode to the top section of the breadboard. Now we can connect a wire from the resistor to the Arduino.

Test everything out and make sure that you’re circuit is going to work before you start soldering.

The sketch was originally made by Robert Spann back in 2009. I just a beginner of Arduino so I got the sketch from mpilchfamily’s instructables . To give the game sound it using the Tone.h Library. You will get an error if you dont install the Tone library, downlod the tone.zip and put it in the adruino library folder. A file of the sketch and Tone Library is also attached.

You can go to How to Install a Library to learn it.

Step 2
Arrange the component, I usually place all components in before starting to solder. But if you want to do soldering one by one,  you can mark on the perfboard which legs of your component will be placed.

Step 5: Complete the circuit on perfboard

Step 4
Add a ground leads, I made it from a quite long wire. and put the wire for connect to the ground of Arduino. (see image 5)

Step 5
Check the components once again before soldering.

“Air waveguides” used to send optical data through the air

Efficient as fiber optic cables are at transmitting data in the form of light pulses, they do need to be...