L3DGEWorld is a tool for monitoring and interacting with networks and computer systems. Within a 3D world, entities bounce, spin, scale and otherwise change. These entities all represent an entity in another context – be it a server, phone, router or other monitorable device. The visual transformations represent various characteristics of these entities, such as packets per second, CPU load, memory usage or temperature. The use of visual characteristics to represent important metrics allows an administrator to quickly see an overview of their systems, and especially whether there are any anomalies. 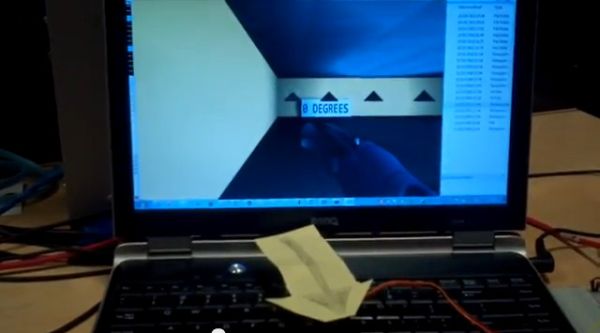 Input and output is taken to/from daemons using l3dgecomm. Previously, it has been used to monitor UPS systems, super computers and Asterisk, as well as its original implementation, monitoring greynets.

arduino-l3dgecomm allows for an all-new type of input and output to L3DGEWorld, implementing l3dgecomm for the Arduino. Monitor and interact with the real world from within a 3D game world! This page aims to demonstrate some example use cases of arduino-l3dgecomm and document how to use it.

For a tutorial on how to set up an Arduino and L3DGEWorld environment to replicate these examples, visit the l3dgecomm tutorial page.

It is trivial for the Arduino to monitor temperature. With a merely a thermistor and a resistor to form a voltage divider, the analog in functionality of the Arduino can tell the temperature.

With this, you can cheaply monitor your data centre’s temperatures, see how hot rooms in your house are, or monitor plants in your greenhouse.

Likewise, identical code and wiring can be used to utilise light as an input. Perhaps it could be a very basic system for seeing if certain rooms are occupied, or to catch the office thief taking food from the fridge.

In the following video, we assume that a normal state is darkness (finger over the sensor). When someone turns the lights on (removes the finger), an alert state happens, and the L3DGE node spins really fast. a

Movement sensors are relatively cheap, touch sensors even more so. Present yourself a visual overview of which critical rooms in your office have people in them and which doors are left open. Both touch and movement sensors present themselves as a digital signal, allowing for high inputs-per-Arduino density.

The mailbox phone alert sends you a text whenever you get mail. I remember anxiously checking my mail multiple times...