I am building an automated irrigation system for my vegetable patch. This will be a system that monitors the soil moisture level and then turns on a pump to send water to my garden according to the detected moisture level.

The water is coming from our rainwater tank, there is also an overflow on the tank that I’ve redirected to the garden (both the vegetable and ornamental gardens) so that water isn’t just sluiced off into my neighbors property. It’s been doing that since before we bought the property.

This instructable is about one fairly simple part of the project, the soil moisture monitor.

For this instructable, you’ll need:

There are three bits that are important in this project.

This connection also passes through the 10k Ohm resistor to 5V (we are splitting the load). It is the difference in load that the Arduino will detect on A0.

The other pin on the Hygrometer connects to GND on the Arduino.

If that’s as far as you go … you’d be done, of course you wouldn’t be able to see any blinky lights … but that’s OK.

If you want to have a visual monitor of the moisture level, then you’ll be wanting some LED. 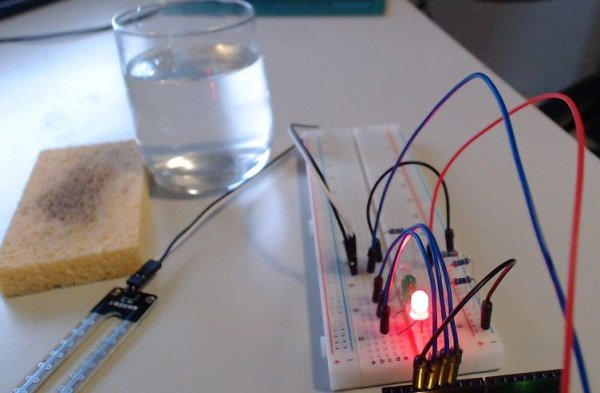 It also turns the appropriate LED on and off according to the same range.

Because I have grand plans of connecting the device to a controller at some later stage, I’m also sending the output to Serial.

The entire sketch is very simple … even I can understand it 🙂

The video simply shows the monitor transitioning between states of Dry/Moist/Wet … with my ham fists in the action.

Intel announced its 4004 processor and its chipset through an ad in Electronic News on November 15, 1971, making them...