As a follow up to the Arduino Audio Input tutorial that I posted last week, I wrote a sketch which analyzes a signal coming into the Arduino’s analog input and determines the frequency.  The code uses a sampling rate of 38.5kHz and is generalized for arbitrary waveshapes.  I’ve also turned the LED attached to pin 13 into a clipping indicator, so you know if you need to adjust your signal’s amplitude as you send it into the Arduino. 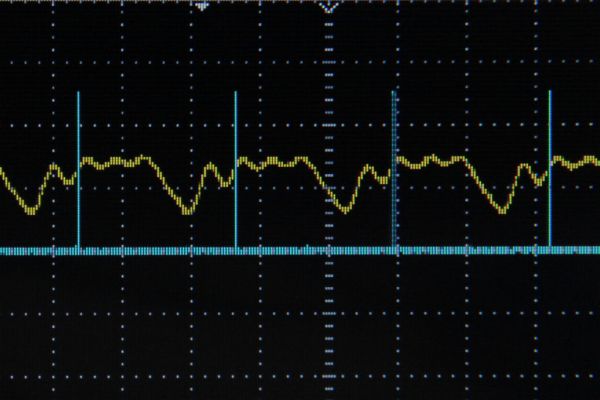 Some project ideas for the code presented here include:

pitch reactive projects– change the color of RGB LEDs with pitch, or make a lock that only opens when you sing a certain pitch or melody
audio to MIDI conversion– get the Arduino to translate an incoming signal into a series of MIDI messages. See my instructable about getting the Arduino to send and receive MIDI for lots of example code to get started
audio effects– use the frequency information to reconstruct an audio signal from the tone() library or with some stored samples to make a cool effects box/synthesizer

The first step of this project is to set up the audio input circuit.  I wrote a detailed Instructable about that here.

First I wanted to experiment with peak detection, so I wrote a piece of code (below) that outputs a high signal when the incoming audio signal has a positive slope, and outputs a low signal when the incoming audio signal has a negative slope.  For a simple sine wave, this will generate a pulse signal with the same frequency as the sine wave and a duty cycle of 50% (a square wave).  This way, the peaks are always located where the pulse wave toggles between its high and low states.

The important portion of the code is reproduced below.  All of this code takes place in the ADC interrupt (interrupts and runs each time a new analog in value is ready from A0, more info about what interrupts are and why we use them can be found here)

I should note here that in this tutorial I use direct port manipulation to turn off and on the output pin (pin 12) of the Arduino.  I did this because port manipulation is a much faster way of addressing the Arduino’s pins than the digitalWrite() command.  Since I had to put all the code above inside an interrupt routine that was going off at 38.5kHz, I needed the code to be as efficient as possible.  You can read more about port manipulation on the Arduino website, or see the comments I’ve written above to understand what each line does.  You’ll also notice in the code below that I used some unfamiliar commands in the setup() function so that I could get the Arduino’s analog input to sample at a high frequency.  More info on that can be found in my Arduino Audio Input tutorial.

How to Build Your Own Anemometer Using Reed Switches, Hall Effect Sensor and Some Scraps on Nodemcu.

In this post, we will learn How to Build Your Own Anemometer Using Reed Switches, Hall Effect Sensor and Some...