Measuring distance is so important in today’s world that things like driverless cars will be impossible without it, that description is probably enough to describe how important knowing the distance between two objects can be. For that reason, today we will be building a distance meter using the Arduino and the HC-SR04 ultrasonic sensor. 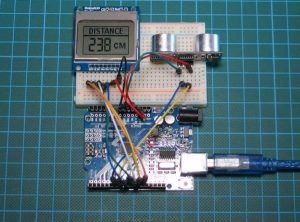 The HC-SR04 ultrasonic sensor is a cheap ranging sensor capable of measuring a distance between 20 – 400cm without contact and at an accuracy of up to 3mm. The sensor is made up of a transmitter and receiver with operating frequency of around 40khz. It uses the echo principle for distance measurement by emitting an ultrasonic wave of 40khz. If there is an object in its path, the emitted wave is reflected and the reflected signal is received via the receiver. The time elapsed between the transmission of the signal and the reception of the echo is then used to determine the distance between the sensor and an object in its path.

The sensor has four pins, VCC, GND, Trig and Echo with trig and echo representing the transmitter and receiver pins respectively.

Some other features of the sensor includes;

The goal of this tutorial will be to measure distance using the ultrasonic sensor and display it on both the serial monitor and the Nokia 5110 LCD.

The following components are needed for this project;

As usual, the exact components used for this tutorial can be bought by following the link attached to each of them.

THIRD EYE FOR THE BLIND – an Innovative Wearable Technology for Blinds.

- The first wearable technology for blinds - Using ultrasonic waves to detect the obstacles - Notifying the user through...