Standard Arduino boards use FTDI’s FT232RL to interface with computer’s USB port. Since FT232R is just a USB to UART converter, it is possible to build an Arduino compatible USB interface using other USB to UART chips. 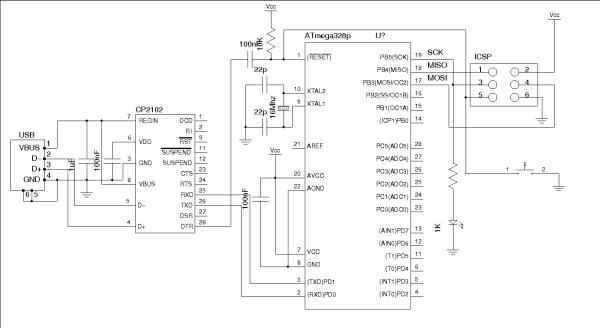 One such alternative is Silicon Labs‘ CP2102. I particularly like this USB to UART transceiver because very few extra components are required for it to work. As an added benefit, this chip is also cheaper than the ubiquitous FT232R. Of course, there are also a few trade offs. First of all, CP2102 does not provide a bit bang interface (the X3 pins on the Arduino board on the other hand can be used for bit bang operations, but the X3 pins are not soldered with header pins by default and thus for the average users no bit bang support should not be an issue). Secondly, CP2102 does not have the configurable general purpose I/O pins to drive the TX/RX LEDs. There are other minor differences as well (for instance the maximum transmission speed for FT232R is 3Mbps while CP2102 tops at 1Mbps. Both chips are more than adequate for the maximum 115,200 baud rate supported in Arduino environment), but they do not affect the performance in our application of interfacing with Arduino.

Here is the schematics for using CP2102 with ATmega328p (the circuit below is compatible with the Arduino IDE):

if you compare the above circuit with the official Arduino Duemilanove board you will see that the interfacing portions (RXD, TXD and TDR) are virtually identical.

Since CP2102 comes only in QFN-28 packaging, some people might find it slightly harder to deal with than TSSOP. Using the prototyping method I mentioned a few months back though, it is fairly straightforward to use the chip on a standard perf-board nevertheless. No special tools or stencils are needed. The following picture shows the USB to UART converter portion of the Arduino, which can be used to replace the FT232 break out board. I chose to break out the converter so that I could use it in other projects that require serial connections.