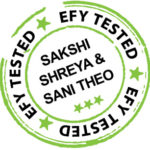 This Arduino based visitor alarm is useful for offices, clinics and shops. It alerts you to the entry of a visitor by producing a beep sound every time the door is opened. The alarm automatically switches off after a few seconds.

Circuit diagram of the Arduino based visitor alarm is shown below. It is built around an Arduino Uno board (Board1), a reed switch (S1) and a piezo buzzer (PZ1). 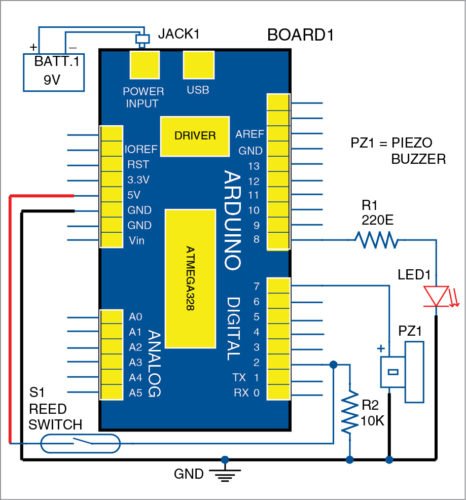 Arduino Uno operates off a 9V DC power supply. It is based on ATmega328 microcontroller and has 14 digital input/output pins, six analogue input pins, a USB connection for programming the onboard microcontroller, a 9V-12V DC power jack, an ICSP header and reset button. It is operated with a 16MHz crystal oscillator and contains everything needed to support the microcontroller. 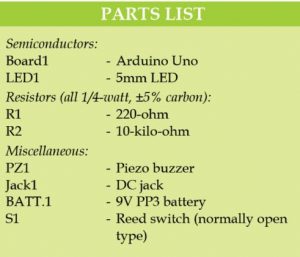 When the door is opened, the reed switch opens and pin 2 of Arduino becomes ‘low’ through a 10-kilo-ohm pull-down resistor. This turns on piezo buzzer PZ1 and LED1. After a few seconds, PZ1 and LED1 automatically turn off.

The software (office_visitor.ino) for this project is written in Arduino programming language. Arduino Uno is programmed using Arduino IDE software. ATmega328 on Arduino Uno comes with a bootloader that allows you to upload new code to it without using any external hardware programmer.

A single side PCB layout of the Arduino based front office visitor alarm and its components layout is shown below. After assembling the circuit, enclose it in a suitable cabinet. Affix the magnet on the door and the reed switch on the door frame such that when you close the door, the magnet comes closest possible to the reed switch. Use a 9V battery/adaptor to power the Arduino Uno board. 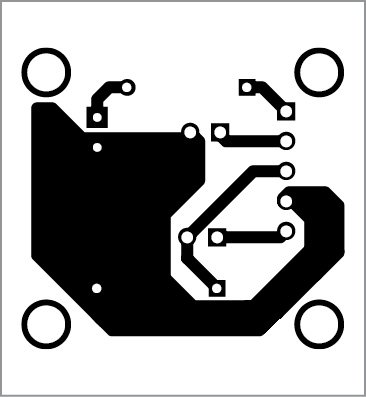 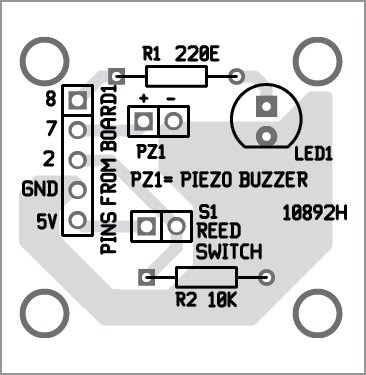