An Android Reflow controller that anyone can build

Welcome to the never ending saga of Andy and his reflow controllers. About a year ago I published a project writeup showing how I built a PID-based reflow controller. It featured a 640×360 graphical LCD from the Sony U5 Vivaz mobile phone and was all-surface mount. It worked well and continues to serve me well to this day but I always thought that there were improvements that I could make in several areas.

Firstly, there’s no reason why it should have been all surface-mount. The LCD in particular has a 0.4mm connector that many people will find very hard to solder by hand. After all, presumably you’re building a reflow controller to help solve that very problem. Chicken and egg. 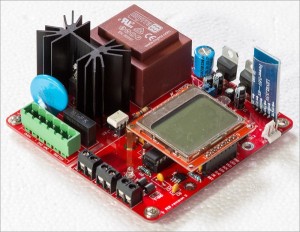 Secondly, the built-in LCD is overkill. We live in the age of the so called landfill android device where you can buy a powerful tablet computer for just £30 online. Why not harness that power and use bluetooth to transmit a control protocol back and forth to a simple on-board controller?

Finally, I used an SSR to pulse the oven power supply on and off. That always irked me. A fully integrated controller would be supplied by the mains and use zero-crossing detection to drive a triac that would dim the halogen oven instead of just switching it on and off.

A few months ago I set to work solving all these issues and I’m happy to say that they’ve all been addressed. In the remainder of this article I’ll present a reflow controller that’s almost entirely through-hole so anyone can build it. It’ll be driven direct from the mains supply and will feature bluetooth control via an Android app.

Let’s get straight into the schematic. This is a modular design so I’ll pick on each part individually and explain what’s going on. Here’s the full document.

For More Details: An Android Reflow controller that anyone can build

How to Make a Water Level Indicator with Arduino 6 11

Knowing the amount of water in an overhead tank can be one tedious task. Usually, you’ll end up climbing up the stairs...