Skip to content
Where does electricity come from? Who invented the light bulb? How do cities use this technology today?

These are just a few questions that we hope to address in this interactive diorama, The Adventure of Electricity!

This project was designed for educational purposes so that younger generations can experience a more hands on approach to learning.  In this project, we show the history of electricity through three scenes.  The first scene shows legendary tale of Benjamin Franklin using a kite in order to decipher the characteristics of electricity and where it is found in nature.  The second scene shows Thomas Edison and his trials to create a light bulb to produce light through harnessing electricity.  The last scene shows the city of Paris, in all its illuminated glory.

How kids interact with this educational tool is through buttons which activate different aspects of the scenes.

* For Benjamin Franklin’s scene one can press a button to light up a lightning bolt which in turn will raise Benjamin’s hair. (Using Flexinol muscle wire to create the movement.)

* For Thomas Edison’s scene pressing the button will light up a representation of the first light bulb ever in history.

* In the last scene, the viewer can light up Paris one sector at a time until the entire city is illuminated.

This was a fun project to work on but also tedious so we recommend allowing yourself plenty of time to build this 3 scene diorama. 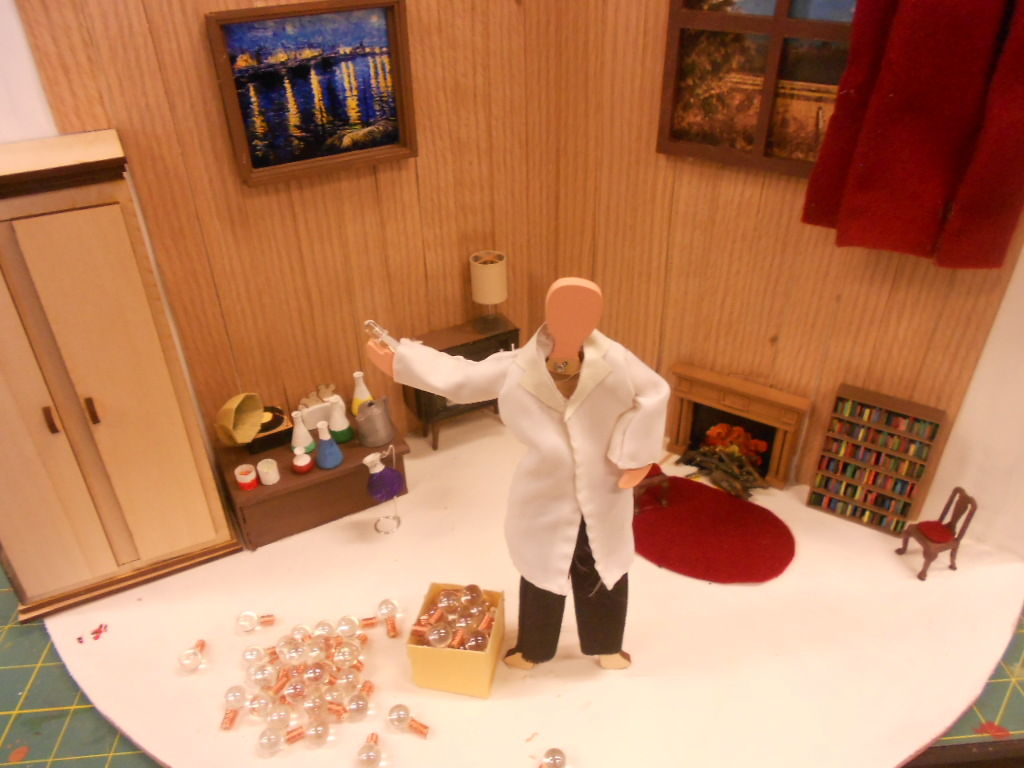 The creation of the base is composed of marking, cutting, and assembly.  It will hold all the objects from each scenery.

mark:
1.)
width = short edge
length = long edge
mark the circle near one of the edges of the board so we can use as much board space as possible using a pencil
the diameter of the circle is 24 inches. measure 24 inches from the length edge of the board and mark on both edges.  then mark the center by measuring 12 inches from one end length wise on both edges of the board and 12 inches width wise on both edges.  Then draw a line across using a straight edge on the length wise marks.  then draw a line straight down the middle of the long part of the board using the width wise marks.  draw a line on the 24 inch marks you made earlier.  Now, with the center marked at the cross points you just made at the 12 inch mark point. tie a string (12 inch) to the pencil and put one end at the center point and the pencil end at the edge of the board. While keeping the string tight draw a circle around the middle.

2.) The circle now drawn use the protractor to mark divide the circle into 3 120 degree zones.

4.) The other 24 * 48 inch board should be divided into 4 12 * 16 inch boards which should be divide the same way as the leftovers part.  (optional) to make these more aesthetically pleasing one can round off one of the corners using a protractor.

Cut:
5) cut the circle out using the buzz saw and then cut out each of the 120 degree divisions

Assemble:
8.) start gluing each of the 16*12 inch boards to each of edge of the pie using the 12 inch edge as the bottom.

10.) At the end of this step you should have 3 scenes which look exactly alike. 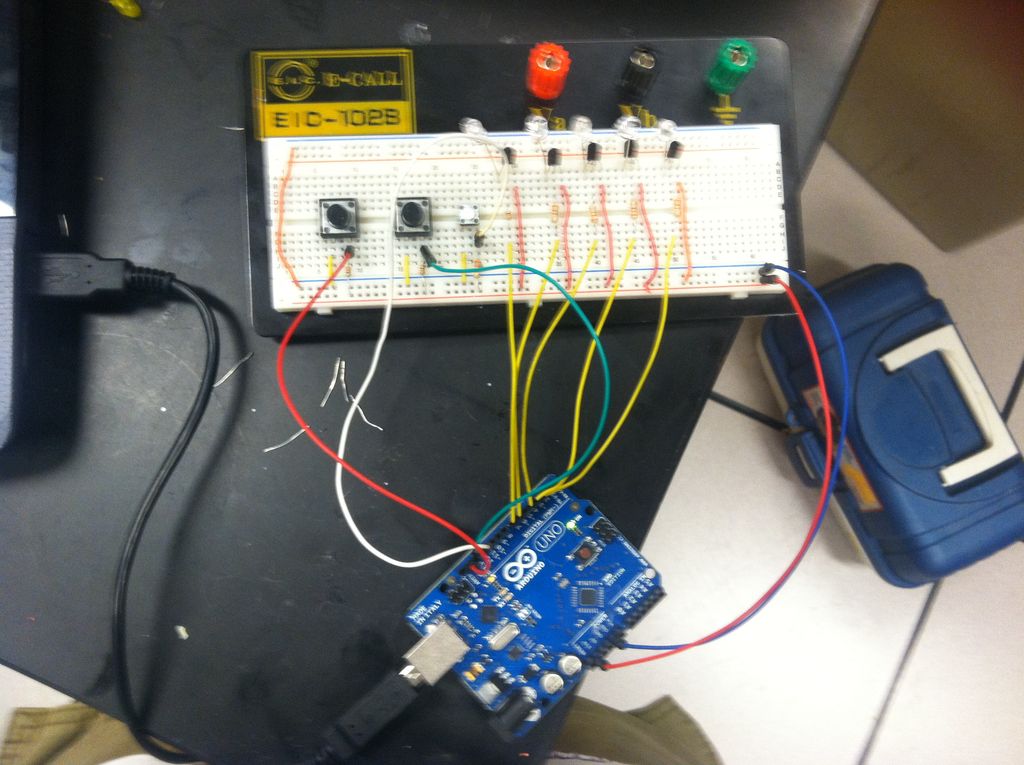 The first scene in our Adventure of Electricity diorama is Benjamin Franklin’s Kite experiment.

This is a simplified (and somewhat stylized) version of the experiment that Benjamin Franklin conducted in 1752 to determine how lightning is related to electricity.

Our scene features Benjamin Franklin atop a grassy hill where he holds the string to a kite that is stuck by lightning at the push of the viewer’s button. When the lightning strikes, Ben’s hair raises on end!

The first step of the Kite Experiment scene was to make sure that using the muscle wire to lift the hair would actually work. We had never worked with muscle wire before, so we started by building a rudimentary Franklin Head + Hair prototype.

Benjamin Franklin will be standing on a hill in this scene, so we need to give the setting some dimension.

Use the 1’x1′ piece of chicken wire to form a hill. Mark on the board several places where you can drill holes to secure wire that will keep the chicken wire in place.

Drill the holes and cut lengths of wire to secure the chicken wire to the board. Twist the wire on the bottom of the structure to keep in place.

Use black, silver, and gray/white paint to create a stormy background. This can be rather abstract looking, since the sky is supposed to be stormy and unpredictable.

Cut elongated cloud shapes from the felt and glue to the background. We used sticky-sided felt but using regular felt and hot glue is fine.

Place your brown fabric over the hill and cut to size. Do not secure the edges yet– you will need to get back into the chicken wire when you place Benjamin Franklin and his wires. Use spray adhesive to attach the faux grass to the fabric. It’s OK if this looks a little mottled. You can enhance the look by using another shade of faux grass or faux moss on the upper layer.

The trees that we have in our scene we found at the local dollar store. (Intended for miniature Christmas scenes.) The bases were originally white, so we painted them forest green. Place your trees in the scene but not on the hill. We want the small trees to give a sense of depth for our diorama.

For the head we needed something spherical and hollow. The first easy choice was a ping pong ball. It can be easily drilled and cut, so we began fabricating the prototype. You may bypass this step if you do not wish to test the muscle wire setup before creating the actual model.

Create two strands of hair by making a small loop at the end of 2-inch pieces of insulated wire. Tie a piece of the nylon onto one loop of wire and string it through one hole. Loop the free end back through the other hole and secure to the other wire hair. Make sure the loop of nylon thread is shorter than the cup.

The idea for this setup is you will string the muscle wire through the nylon loop and that it will cause the hairs to lift up. See the video below for a visual description.

Read more: The Adventure of Electricity: An interactive light diorama