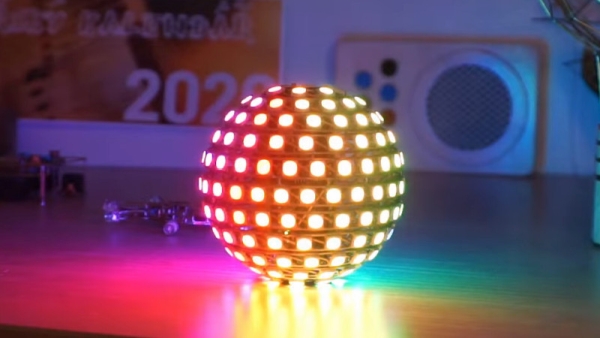 194 LED BALL IS FREE-FORM SOLDERING ON ANOTHER LEVEL

We’ve all seen plenty of impressive free-form soldering in these pages, maybe some of us have even had a go ourselves. Using nothing but bare conductors, electronic components, and solder, complex and beautiful electronic sculptures can be created. But the latest free-form project from [Jiří Praus] takes the medium to a new level, as he’s taken no less than 194 bare surface-mount addressable LEDs and formed them into a perfect sphere supported by nothing more than soldered copper wire.

This feat was achieved with the aid of a 3D printed hemispherical jig with spaces for each LED, and each half was assembled in a marathon soldering session. Some significant fault-finding was required due to a few dry joints, and an ESP32 board and Li-Po cell were fitted in between the two halves as they were joined. The result is a triumph, a Christmas bauble like no other, and one which we aren’t sure we could manage to solder so well even on a good day.

If you recognise [Jiří ]’s work, it’s probably because we’ve featured several of his creations previously. It’s always difficult to pick a favorite, but the one which caught our eye the most was his fully functional freeform Arduino Uno.

Source: 194 LED BALL IS FREE-FORM SOLDERING ON ANOTHER LEVEL