This is a fun an very useful project that allows easy access into any door with a deadbolt. I have another version that is used on my garage door and uses the same basic circuit and fobs. The system operates in the RF region at 125 KHz. Fobs are used to actuate one of two relays on the main control board. With each scan the deadbolt toggles – if it is unlocked it locks and the red LED comes on, if locked it unlocks and the green LED comes on. One relay causes the deadbolt motor / mechanism to lock the door, the other causes the door to unlock. A regular key can still be used and the deadbolt can still be locked and unlocked manually if desired. Operating the circuit with the key or manually operating it with the deadbolt knob can cause it to fall out of sync with the controller and indicate locked when it is actually unlocked or vice versa. To correct this just cycle the unit with the pushbutton on the deadbolt housing or flip the deadbolt knob the opposite way. I have thought about adding some limit switches to eliminate this problem. Perhaps in some future version I will implement them. I have been using this project for a couple of months with very few hiccups. It is fun to build and adds a definite ‘nerdivity’ to my home. 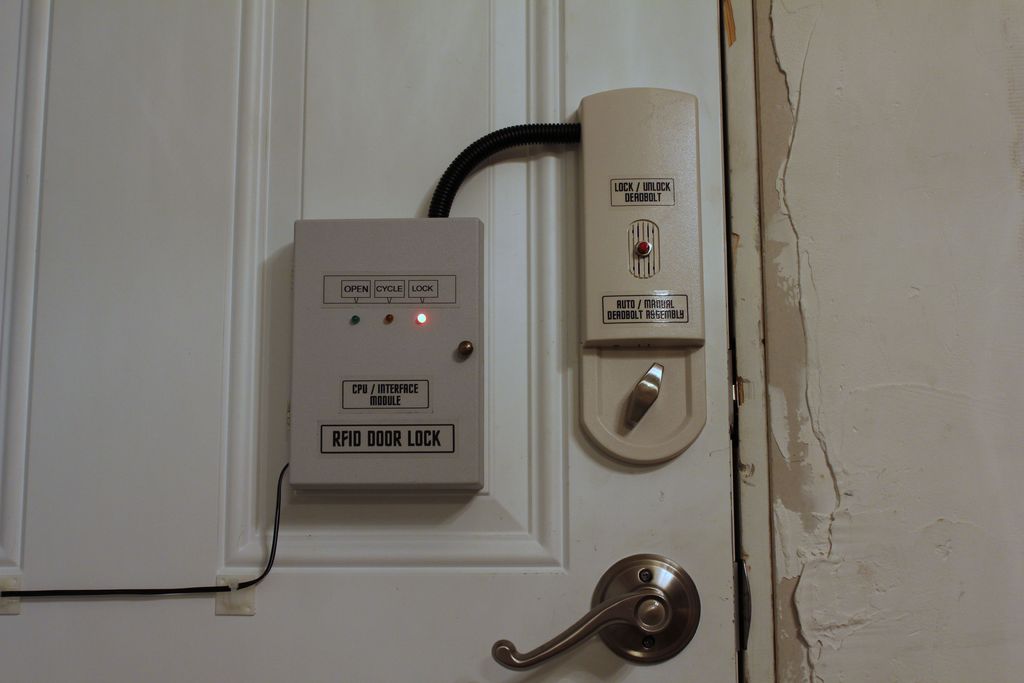 I based the project on a store-bought electronic deadbolt. It was battery operated and had a keypad on the outside to allow entry with a user defined code. I removed all of the electronics from the indoor housing keeping only the electric motor and mechanism. The mechanism has a built-in clutch that prevents damage should the motor remain on for too long when cycling. My motor is set for a cycle time of about 1.25 seconds.

This project is based on the Kwikset Powerbolt Model # 907 15 SMT CP. It cost $69.97 at Home Depot. Almost any battery operated deadbolt will work. It needs some type of clutch mechanism to protect from over-cycling. This was the cheapest unit that Home Depot sold. You may get lucky and find an open box item or a defective unit that can be salvaged. It looks neater than trying to build the motor drive myself.

In future versions I will try to place all components inside the plastic housing where the OEM circuit board was located. There many similar projects you can research on the internet. Do a search for ‘RFID ARDUINO DEADBOLT’. There a few on Instructables as well. A Universal RFID Key by drj113 available in Instructables is a good read on RFID theory. Going over this material will be time well spent.

Here is an example of the device in operation. It is a bit noisy as the gears grind inside. It is virtually impossible to lock yourself out of the house using one of these. I had done this one too many times with my door key, so I disabled the locking mechanism of every door knob lock in my home. I only use deadbolts for locking doors now and am happy to report I have never locked myself out since.

Here is a picture of the FOBs used in this project. They are fully encased and are almost indestructible. A look inside shows a coil and microchip. There are two form factors that can operate the device, a FOB or a card. I keep the card version in my wallet and a FOB on my key chain. I just take my wallet an wave it over the reader and it unlocks. I use the same card / FOB to access my garage and my house. There will be more about this in the Arduino sketch section later. Power and data are delivered and retrieved via the antenna coil. There are no batteries inside to ever fail. This version contains an identification number and is read only. Other types are available that can have information stored on them. That would require a different reader than the one used here. I have yet to experiment with the read / write type. This technology is finding it’s way into our everyday lives at breakneck speed.

This is the experimental version of this project. The microcontroller is an ATMEGA 328 loaded with a program called a bootloader. It is the bootloader that makes it an Arduino. It took some time to work out the kinks, but I enjoyed learning along the way. This version has an LCD display that when scanned shows the name associated with the FOB. It also shows fault messages like ‘FOB Not Recognized’ and ‘Welcome Home Bill’. I thought adding a ladies voice to it might be cool. I will wait to add that to a doorbell project that I am pondering.

A quick shot of the subassemblies needed to build the project. Don’t let the complexity scare you away. Build and test each piece one at a time. You may want to stop along the way and experiment. If you are new to Arduino there vast amounts of tutorials available online. The best one is the official Arduino website at http://www.arduino.cc/. Breadboarding the unit first can be helpful in working out the bugs.

I built two boards for this project. One has the Arduino microcontroller on with all input / output connectors attached. The Adruino is in a socket mounted on a breakout style board called RBBB from ModernDevice.com. It allows the resonator, voltage regulator, reset switch, power jack and power conditioning in one convenient place. Power for the entire project is fed into this board from a wall-wart (9VDC @ 1A) AC adapter. Power before the 7805 regulator is taken to run the motor. Power after the 7805 regulator and filtering is used to power everything else. Note the blue shrink wrap on the 7805. This was removed after testing and a small heat sink added in it’s place. I have about 20 of these RBBB boards in my lab and this one was changed out sometime during construction.

The RFID reader itself is located on the small green circuit board on the lower left end of the controller board. It comes with a rectangular coil of wire which is the antenna. I housed it inside a plastic project box. You can read details about it’s construction below. Be sure the use the UART type and not the WEIGAND. Only the UART will work with the code I have written for this project.

I like to use pre-made jumpers in my projects. They are very cheap and allow quick connect / disconnect during construction and debugging. The Arduino RBBB board above uses these and it makes for efficient work. 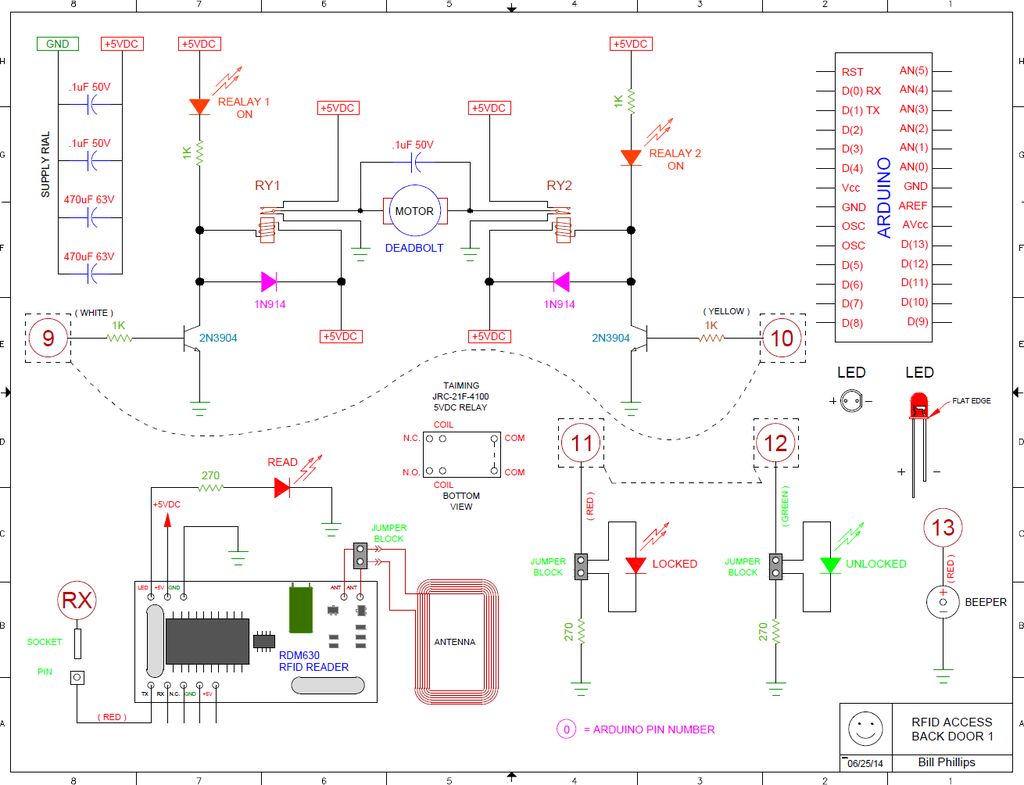 The main board is located inside a beige box labeled CPU / INTERFACE MODULE. I could not think of a better name so I’ll stick with this for now. Anybody have any ideas? When I refer to the main board I am speaking of the large perf board. There is also an Arduino board that I have been calling RBBB. This is what the manufacturer calls it. Both boards are located in the hinged box hanging to the left of the deadbolt enclosure.

The red circled numbers denote Arduino pin numbers. If you like, you can build the entire project on one piece of perfboard or create a PC board layout. When communicating with the Arduino chip you must unplug the connector labeled RX. You will get a fault from the Arduino software if you leave this wire connected while attempting to communicate. This pin is one of two that are used to send serial data to and from the RFID reader board to the Arduino. In normal operation this pin must be connected. I have placed a male pin on the circuit board with a female connector going to the RX pin on the Arduino circuit board. This pin is labled TX on the green RFID board and is connected to RX on the Arduino board. Simply unplug it, upload your sketch, plug it back in and all should be well.

Notice the red and black dots on back of the board. They indicate positive and negative power supply rails. It is very easy to get them mixed up during assembly. The relays, RFID receiver board, LEDs and miscellaneous connectors are all mounted on this board. You can use whatever construction method your imagination can come up with. Creating a universal PC board with all major parts on it might be an efficient approach if you are planning to build more than one. Wiring is not critical since only control signals are being used. The antenna coil is the only exception as it sends both power and data to and from the RFID board. My antenna coil is mounted about 14 inches away from the RFID board and has proven to be quite reliable.