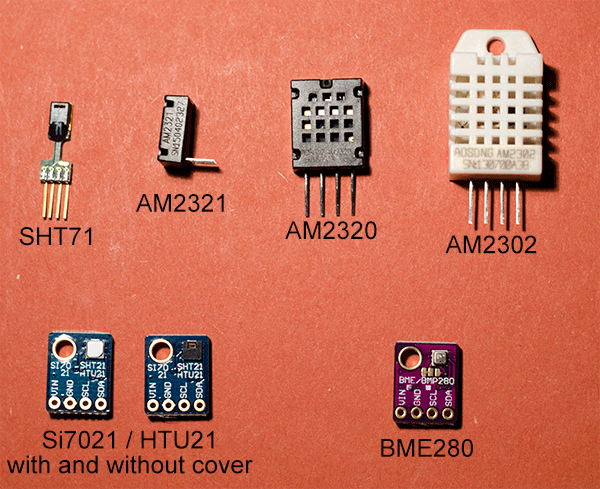 Previous experiments looked at comparing a set of six Aosong DHT22/AM2302 and compared the Aosong DHT22/AM2302 with the Aosong DHT11 and Sensirion SHT71. Here I have added five new devices meaning this test now covers most commonly available low-cost digital hygrometers. This page will present only new results. For details of how the experiment works, please refer to the previous write-ups. 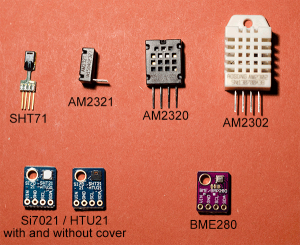 The devices now included are:

The DHT11 is clearly a different class of sensor with substantially lower specification and has been dropped from further investigation. In my tests it performed perfectly well with respect to its specification, but I am only interested in devices that claim to read the full range 0–100% RH.

The Devices and Test Apparatus

Also commonly known as DHT22. Two devices (E & F) from my previous experiments have been included. Device E was selected as the best of the six I originally started with. [AM2302 datasheet]

The AM2320 is effectively the latest version of the AM2302 with the addition of an option to communicate over I2C interface. It is physically a little smaller, but with identical pin-out. The one-wire serial of the AM2302 is retained making this a simple drop-in replacement. [AM2320 datasheet]

The AM2321 appears to be the same but in a much smaller physical package and narrower pin pitch. It might be electrically identical. There is some suggestion from the manufacturer’s web site that this might already be discontinued and replaced by AM2322. I am not sure. [AM2321 datasheet]

The sensing elements in these are likely the same as each other and I presume similar to the AM2302/DHT22. The internals of these devices are not exactly the same as the DHT22 because they do not exhibit the very distinctive sawtooth behaviour around 25°C.

I discuss these together though they are distinct devices from two different manufacturers. In normal use they are interchangeable both in terms of specification and communications protocols and even have the same I2C address so are drop-in replacements for each other. Similarly the Sensirion SHT21 (not included here) also has a near identical specification and interface. I have seen the same third party generic break-out boards being sold with any one of these devices attached. (See Figure 1.) The one difference I have found and possibly the only way to be sure which device you have is in the devices’ unique serial numbers for which each manufacturer uses a slightly different format, detailed in their respective datasheets. So long as you do not attempt to read the device serial number, these three sensors function identically. That is not to say they will all perform identically. Though equivalent for most normal use, the precise specification details do differ, most particularly in their speed of response. [HTU21D datasheet, Si7021 datasheet]

An interesting feature of the SHT21, HTU21 and Si7021 is that they are available in options with or without a protective PTFE membrane over the sensing element. For this test I am running one device each, with and without. (See Figure 1.) The intent had been to include an identical pair of sensors with and without the cover, however when my devices arrived I found the retailer had sent me HTU21s without the cover and Si7021s with the cover. It was only by reading the internal serial numbers I was able to ascertain that. Though not discussed in detail on this page, the effect of using the protective cover on the response speed has been investigated elsewhere. My conclusion was that is has virtually no impact at all.

Send status messages of your MKR1000 via Pushover service to your mobile phone, etc. Things used in this project Hardware...