This Design Idea gives two versions of an indicator light that changes from green to red as a battery discharges. There are many circuits that do this sort of thing, but all the ones I have seen are too complex and costly for my taste. This DI shows a method that uses an absolute minimum of low cost parts: a dual-color LED and four other parts. 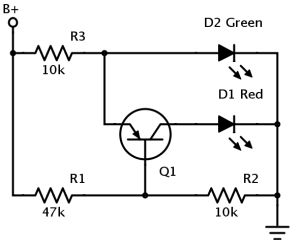 For the typical dual-color LED, the difference in forward voltages is 0.25V, which is also the transition voltage from green to red. The change on B+ that causes a complete color change is 0.25V times the divider of R1 and R2:

This transition is centered around a voltage that is VD minus VBE; about 1.2V (most of the change in VD with temperature is also subtracted out). Taken together, a change on B+ from 7.1V to 5.8V will cause a change from green to red.

Different LED combinations will have different voltage differences, which may not be large enough to effect a complete color transition, but you can still use this design by putting a diode in series with D2.

Figure 2 replaces R1 with a Zener diode, creating a circuit with a much narrower transition. There is no longer a divider effect; a change of 0.25V on B+ will change color. The transition point will be 1.2V + VZ (about 7.2V for the parts shown).

Online Courses to learn everything about Arduino

Arduino Step by Step Tutorials : Your complete guide. You will enter in the world of wonders embedded system, and...