Graphing calculators are an interesting niche market these days. They’re relatively underpowered, and usually come with cheap, low resolution screens to boot. They remain viable almost solely due to their use in education and the fact that their limited connectivity makes them suitable for use in exams. The market is starting to hot up, though – and TI have recently been doing some interesting work with Python on their TI-83. 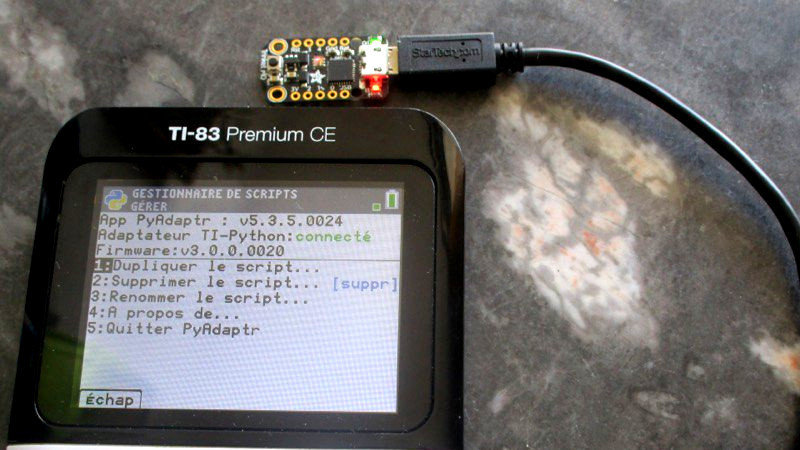 Rumor has it that TI have been unable to get Python to run viably directly on the TI-83 Premium CE. This led to the development of the TI-Python peripheral, which plugs into the calculator’s expansion port. This allows users to program in Python, with the TI-Python doing the work and the calculator essentially acting as a thin client. The chip inside is an Atmel SAMD21E18A-U, and is apparently running Adafruit’s CircuitPython platform.

This discovery led to further digging, of course. With some hacking, the TI-Python can instead be replaced with other boards based on Atmel SAMD21 chips. For those of you that aren’t in Atmel’s sales team, that means it’s possible to use things like the Adafruit Trinket M0 and the Arduino Zero instead, when flashed with the appropriate CircuitPython firmware. It’s a tricky business, involving USB IDs and some other hacks, but it’s nothing that can’t be achieved in a few hours or so.

This is a hack in its early days, so it’s currently more about building a platform at this stage rather then building fully-fledged projects just yet. We’re fully expecting to see Twitter clients and multiplayer games hit the TI-83 platform before long, of course. When you’ve done it, chuck us a link on the tip line.

Remotely we control our home with MKR1000 and IOT of Blynk. We can manage the boiler, the 'anti-theft irrigation, open...