The top 10 crystal oscillators from SnapEDA

A crystal oscillator is an electronic circuit that generates an electrical signal with a very precise frequency. To achieve this, it uses the mechanical resonance of a vibrating crystal made of piezoelectric material. 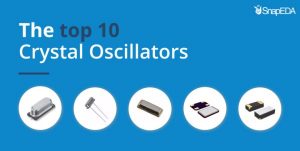 The first crystal oscillator was invented in the late 1920s by Walter Guyton Cady who was interested in submarine detection with ultrasonic waves. He suggested that a piezoelectric resonator could be used as a frequency reference, a coupling device between circuits, or a filter.

Crystal oscillators are the most common type of linear oscillators. They are most commonly made of quartz, which sets the frequency at which a specific oscillator works. These devices are used in microcontrollers and microprocessors for providing the clock signals and other industrial applications such as computers, radios, clocks, watches, TVs and more.

Let’s take a look at the top 10 Crystal Oscillators on SnapEDA!

Note: This data is based on downloads of symbols & footprints on SnapEDA. Browse more crystal oscillators here.

E-paper Shield Kit for the Teensy

Low cost, no power, and easy to use: E-paper is here! The E-paper Shield Kit makes it easy for you...