We’ve been working for a while on this new wifi shield for Arduino that is quite different from what you can find already on the market. 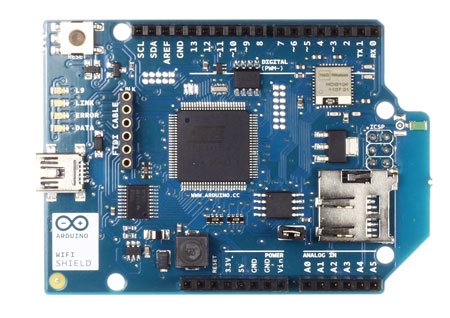 Instead of just getting the usual pre-made module we decided to build a product that would encourage hacking and modifications so we decided to use an AVR32 processor running an open source version of TCP/IP and the WIFI software stack. The Arduino communicates over SPI with the AVR32 and this in turn controls the WIFI module, an HDG104 from H&D Wireless. Following the Arduino tradition the full software stack running on the AVR32 is released as open source as well as the Arduino library that controls the shield.

Having the full source for the software stack allows adding more complex protocols directly on the AVR32 without using the limited code space of the atmega328 on the Arduino. On top of this, skilled C developers can re-program the shield to operate as a standalone device without the need of an Arduino connected to it.  Since we expect that there will be amazing new features created by the community we made updating its firmware very easy, just connect a usb cable to the shield. We believe this opens up to a lot of hacking potential.

For more detail: The Arduino Wifi Shield is now available

DIY Robotic Hand Controlled by a Glove and Arduino

This project idea came to me when I was sitting on a bed on a hotel room on vacation. I...