Tachometer is a device used for measuring the number of revolutions of an object in a given interval of time. Usually it is expressed in revolutions per minute or RPM. Earlier tachometers purely mechanical where the revolution is transferred to the tachometer through mechanical coupling (cable or shaft) , the rpm is determined using a gear mechanism and it is displayed on a dial. With the advent of modern electronics, the tachometers have changed a lot. This article is about a contactless digital tachometer using arduino. The speed of the motor can be also controlled using the same circuit. The RPM and all the other informations are displayed on a 16×2 LCD screen. The circuit diagram of the digital tachometer using arduino is shown below.

Arduino is used for counting the RPM and displaying it on the LCD screen. Emitter of the photo transistor is connected to the Interrupt 0 (digital pin 2) of the arduino. The arduino interrupt is configured to be rising edge triggered. As a result the will be an interrupt for every upward shoot in the emitter waveform. The number of interrupts occurred in a given time is counted by incrementing a varible using the interrupt service routine. 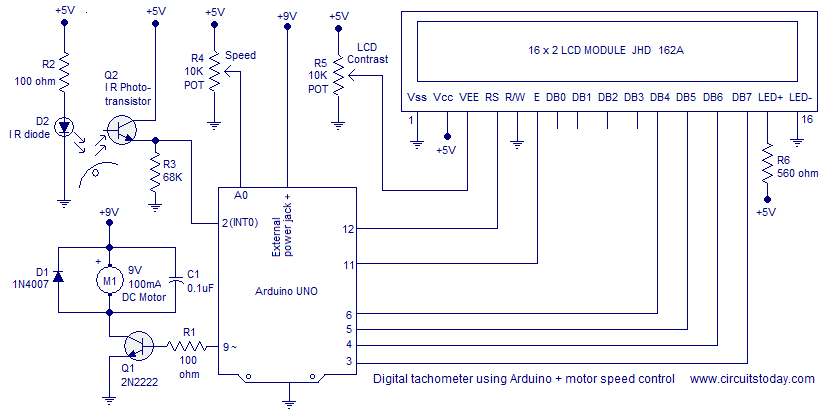