This project is a portable, Arduino-powered, grid-based MIDI controller that boots up into a variety of apps to do lots of things with sound. It has 16 backlit buttons, used as both inputs and outputs to give the controller some visual feedback. 2 potentiometers give analog control, depending on the app the pots are assigned to tempo, MIDI velocity, pitch, and scrolling (making the available grid space larger than 4×4). An x/y accelerometer and an x/y gyroscope add some playful, gestural control to the device; most of the apps implement a “shake to erase” control and several respond to tilt in various ways. It boots up into 7 different apps (described below), though it has the potential to boot up into 16 total. This device is primarily a MIDI controller, but I’ve also written an app that allows you to pull the button and analog data into MaxMSP and to control audio. 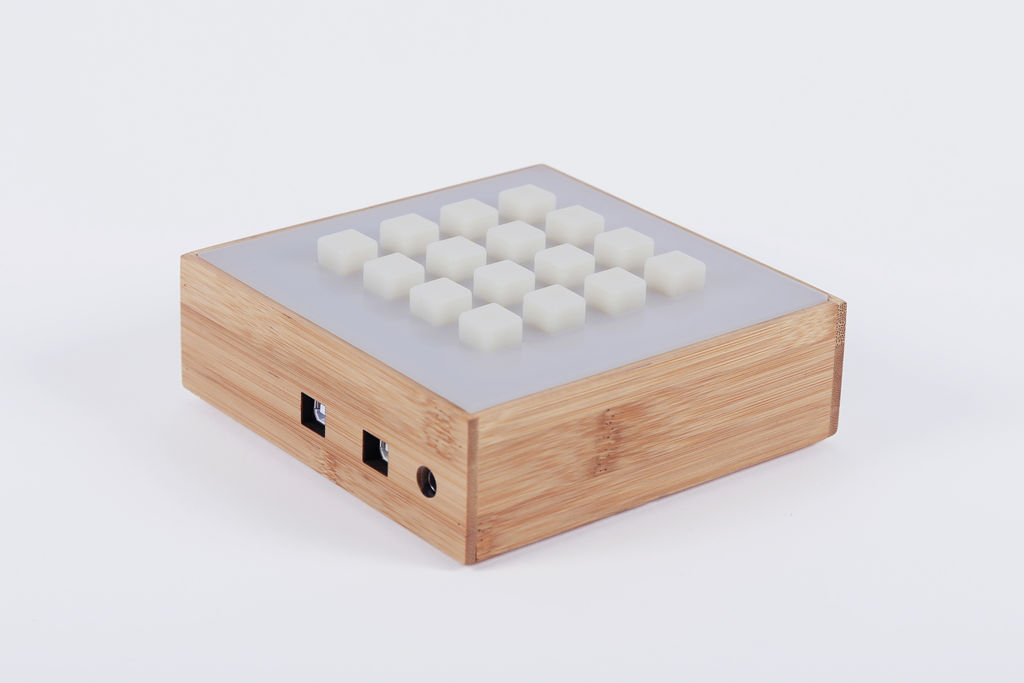 This controller was inspired by both the monome and tenori-on. When I was in college, I built a large touchscreen display, based on the Arduinome monome-Arduino clone schematics and code, that worked with all the open source monome applications written in MaxMSP. There are a ton of people building their own monome-type devices using these buttons from Sparkfun and the Arduinome code, as well as a few variations on the theme. With this project, I was interested in making a device that was a little more self-contained and relatively cheap to make (lots of buttons = lots of $). In keeping more with the concept of the tenori-on, this controller does all its app processing itself, it does not rely on a computer to process button presses/analog controls into MIDI. This means you can plug it directly into a synth or any device that understands MIDI and you’re good to go, no computer required. It runs off a beefy LiPo battery that keeps it running for days on a charge, so it’s fairly portable as well. In keeping with the monome side of things, it’s totally open source and can be adapted to your particular audio setup/needs. All the Arduino code is up on github (click the cloud-shaped button to download), along with a MaxMSP patch that decodes data from the controller into something usable in Max.

An overview of the apps I’ve written so far:

Pixel Tilt – One pixel moves across a 2D keyboard with tilt, triggering MIDI as it moves. Control velocity and basenote with pots.

Flin – Music Box app based on monome. Speed and velocity of notes controlled by y tilt. Paging across 16 “lanes” with pot. Shake to erase.

Serial Communication with MaxMSP – Pull data from buttons and analog controls into MaxMSP and use Max to send LED states. Supports 5 bit analog controls for x/y accelerometer and 2 pots. This is great if you want to run audio processing applications with the controller. Download Serial Demo app (SerialDemo.maxpat, included with the Arduino files, click the cloud-shaped button here) to parse data in Max. Beat slicer (shown above) app is included with the Arduino files as well.

Boiing – Bouncing pixels that generate polyrhythms, based on this tenori-on app. Bounce direction based on y tilt. Speed and MIDI velocity (loudness) controlled by pots. Shake to erase.

SPARKFUN:
(1x) Button Pad 4×4 – LED Compatible Sparkfun COM-07835
(1x) Button Pad 4×4 – Breakout PCB Sparkfun COM-08033
(1x) Arduino Uno Sparkfun DEV-11021
(1x) Accelerometer/Gyro 5 Degrees of Freedom Sparkfun SEN-11072
I put a 3-axis accelerometer and 2 axis gyroscope in this controller to give it some gestural control, but so far I haven’t actually used the gyro in any apps, and I’ve only got the x and y axis of the accelerometer wired up. That means you could sub in a simpler/cheaper part like this.

All schematics for this project are shown above. Detailed overviews of the 74HC595, 74HC165, and power connections are given later in this Instructable. All the Arduino pin connections are listed below:

no connections to digital pins 8-13

Thread the leads of 16 LEDs (5mm or 3mm are fine, I used 5mm) through LED holes in the Sparkfun PCB. These boards are compatible with 4-lead RGB LEDs, so there are four available holes on each button pad. You can use the two center holes for single color LEDs (see figure 3). Be sure that the flat edge of the LED (the cathode) lines up with the flat marking on the PCB.

Solder 16 diodes to Sparkfun PCB. Be sure to line up black marking on diode (cathode) with the stripe on the PCB.

Cut about 1ft of 16 conductor ribbon cable. Separate and strip the ends of all 16 wires on one side and solder to Sparkfun PCB. The following list gives all the colored conductors in order with the name of the PCB hole they should be soldered to, if you do this correctly none of the wires should cross. Note that since I’m only using a single color LED, I’ll wire up only the “blue” anode.

Use a bench vice to clamp the16 pin socket on the ribbon cable. If you do not have a bench vice do not use pliers do this, you will clamp the socket on sideways and mess up the connections. You’re better off using a hammer to tap the clamp shut, just make sure you are always applying pressure evenly across the socket.

Be sure the clamp the socket on the ribbon cable in the same orientation indicated in the images above.

Step 6: Multiplexing with Arduino and 74HC595

Two 74HC595s (wired in parallel) will be driving all the LEDs in the project as well as providing power to all of the buttons. The 74HC595 is an 8 bit serial in parallel out shift register. I’ve written a detailed tutorial about multiplexing with the 74HC595, and you can find more info about this chip on its datasheet. Please note that the 74HC595 drawn in the schematic is not a pin diagram, I have rearranged the order of the pins to make the circuit diagram more clear. The pin diagram for the chip is shown in fig 4.

The 74HC595 has the following pins (the technical name may be one of several things depending on which data sheet you are reading):

The connections between the 74HC595 and the sparkfun board are shown in the schematic and repeated below:

The remaining pins have the following connections to the Arduino (also shown in schematic):

Solder two rows of eight header pins to the protoboard. This is where the ribbon cable socket will attach to the board.

The 74HC595 will be driving the LEDs in the sparkfun board. However, this chip only outputs 0 or 5V and it can output as much as 70mA. This means we must use current limiting resistors to prevent damaging the LEDs.

From the specs of the LEDs I used:
max forward current: 30mA
forward voltage: 3.2V

I used 68 ohm resistors so that I was not running at the absolute maximum, but also ensuring that I wouldn’t lose too much brightness. (I made a mistake a grabbed the 100KOhm resistors when I made this project, I fixed it later, but the stripes of 100Ohm resistors should be blue, grey, black, gold, ignore the colors in the images).

These are the sample calculations for the specific LEDs I used, you’ll need to do you own calculations based on the specs of your LEDs. If you are unsure of what to do, use 220ohm or higher resistors; using too much resistance will make the LEDs less bright, but they will not be damaged. 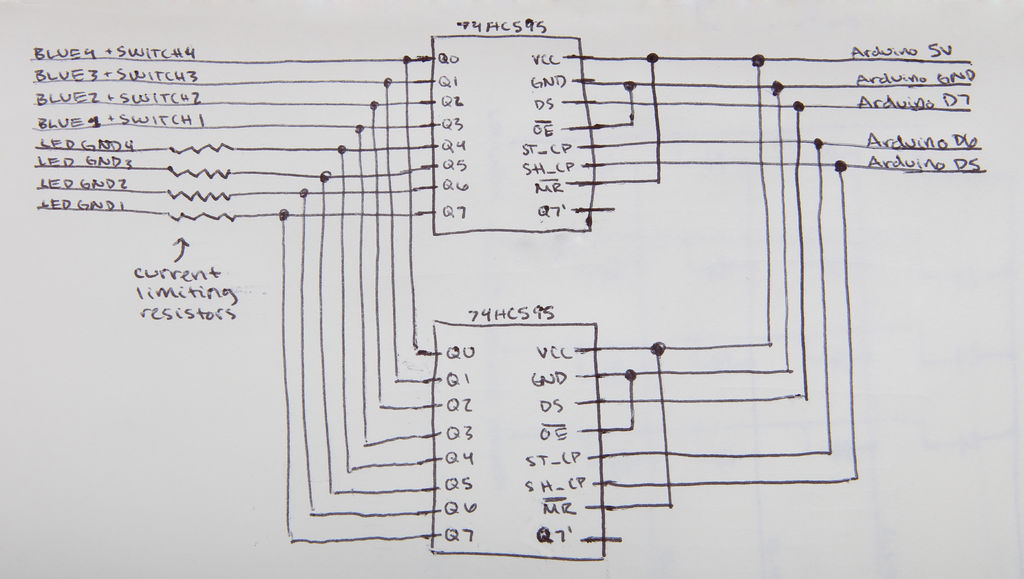 Solder an 8-pin socket to the protoboard as shown in the images above.

As shown in figure 6, the output pins (Q0-Q7) are located on pins 1-7 and 15. This image was taken from the datasheet of the 74HC595. Connect the resistors to pins 4-7 with jumper wires as shown in figures 1 and 2. Connect pins 1-3 and 15 to the header pins according to the schematic (note the wiring in the image is incorrect, but the schematic is correct). The pins connections to the 74HC595 should be as follows:

Be sure to get these pin connections correct- do this part slowly and refer to the schematic often.