Use the force, Luke. Close your eyes, hold on tight to your light saber and……..
Don’t touch that dial.  No tweaking the knobs.  Just wave your hands in front of the two sensitive sensors embedded in this bespoke piece of wearable tech. 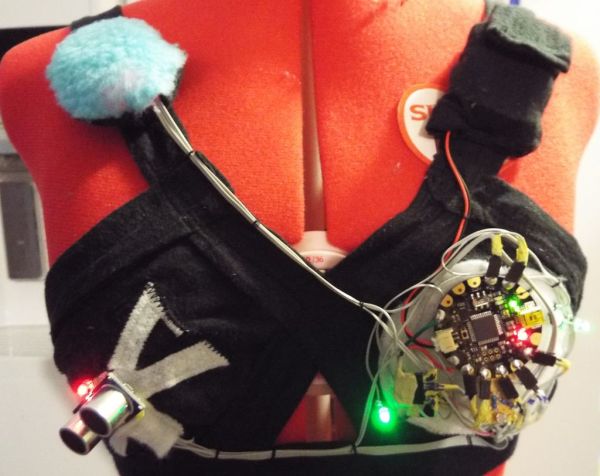 The garment has an embedded Adafruit Flora wearable microprocessor to generate R2-D2 theremin like sounds.

And it comes in Adafruit black.  Do not fear the dark side.

Can you save Alderaan from destruction by the Death Star?

WARNING: Not TSA nor Taliban approved….wait, that’s the other Evil Empire. And don’t start cancelling your newsletter subscriptions, well, not just yet… 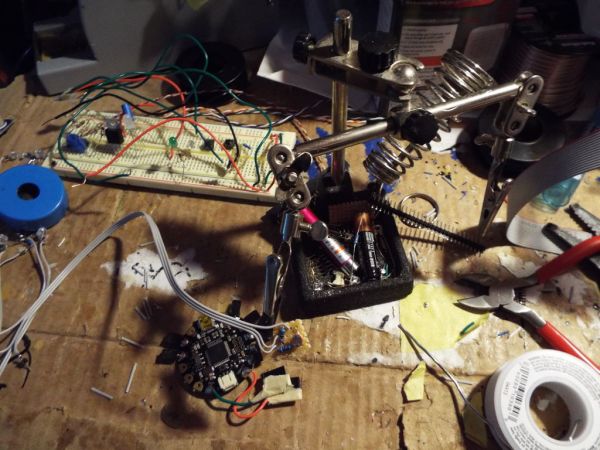 You need a few things to make this project.

I used an Adafruit Flora Arduino compatible wearable board as the core of the electronics.

A photocell detector sensor (from an assortment pack found at Radio Snacks, bigger sensor should be more sensitive)

a piezo buzzer to use as a speaker

A bra for the foundation…I made mine

If custom making your bra, you will need to know how to sew

Various felt scraps for the other details

CAUTION: Soldering and sewing are inherently dangerous.  Use caution. Always learn from a certified Jedi Master before attempting to use a light saber.

Step 2: My cup runneth over…

It would have been embarasking to go into a store to buy a woman’s brassiere.  The concept of this was probably to get the largest size available since it would offer the best opportunity to lay out my electronic components. And when I pay at the cashier, I would have to say “It’s for an art project.”  They would still smirk, “Yup, he’s a perv.”  I have a reputation to uphold…wait

My only other option was to make it from scratch.  We have the technology and the know-how.  We can build it.

I had to borrow Caitlin’s dressform to use as a model.

Designing a bra does encompass STEM concepts(static and dynamic loading, stress analysis, force feedback, motion control…) so for all the peeps out there, consider the engineering field as something you may want to get into.  The research is hands-on can get quite intensive.

And be sure to look for the Union label or signs of the Rebel Alliance.

This is the first time I have made a bra so this is all prototype, just like the Death Star that is orbiting around Alderaan.

Start out with strips of cloth that you will make into straps and bands.

I used a serger to form cloth tubes which I flipped inside out to hide the seam.

There are many instructables on making ladies brassieres.  Where else would you go first to find out how to make something.  I am not making some fine lingerie so I will embark on my own method.

Having a dress form iis essential to creating a fitted garment.  You can test fit and mark any alterations needed.

I started out with a bottom band.

Pin in place and remove to sew.

I switched over to the sewing machine to use a zigzag stitch to tack everything down.

Once you have the basic “harness” assembled, time to give it some support.

I placed another band on the side to conform to the cup.

This is the superstructure that defines the brassiere.

Step 4: Over the shoulder holster…

So  now it is beginning to look like a piece of tactical gear.

Cut out a piece of fabric to cover each of the openings for the bra cup.

You need to place a dart(seam to gather up excess fabric) so that it will form the cup shape.

Trim so that there is an allowance to sew the cup panel in place.

I serged around the cup panel so the fabric would not fray.

Use the sewing machine to attach the cup panels in place by following the outline defined by the support bands.