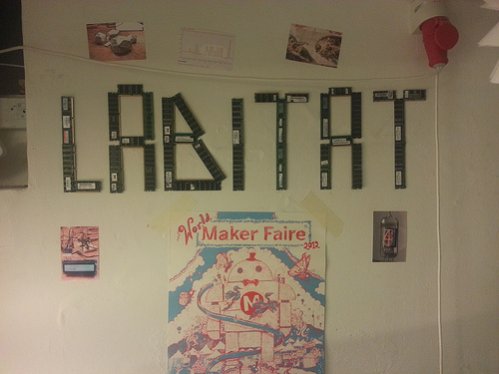 Something is rotten in Denmark (Bio-Hacks)

Massimo and I had the chance to visit a Labitat makerspace in Copenhagen. I have to thank Martin  to let us in on a non-visit day and move underground, where the lab is.

The main reason of our visit was getting in touch with the Bio-Hackers and Maker Community meeting there, get them involved in the Call of Makers for the upcoming European Maker Faire in Rome. We had a good time in talking with them about the strange situation we are witnessing here in Europe: many languages, many nations, one big movement of people tinkering around stuff. Get everybody to know about this event and the chance to meet and talk to each other is a massive task. But we are going to overcome it!

The place is just super. I’ve been involved in the making of a makespaces in the last three years of my life, but I have no words in describing the feelings I had in witnessing the massive amount of contents that basement kept. No joke.

I tried my best in recovering those objects, those feelings and this odd XXIst century knowledge in a pool set of Flickr, where I tried to describe and follow the different projects I’ve seen.

For more detail: Something is rotten in Denmark (Bio-Hacks)

Focus a beam of sound at objects or into your head! This project is a follow up to my widely...