PORTLAND, Ore.–Now before you get all excited by the headline, which is not click-bait according to the researchers, a new kind of nanoscale rectenna (half antenna and half rectifier) can convert solar and infrared into electricity, plus be tuned to nearly any other frequency as a detector. The invention was made at Georgia Tech (Atlanta) and peer-reviewed in today’s issue of Nature Nanotechnology.

Right now efficiency is only one percent, but in the paper (DOI: 10.1038/nnano.2015.220) professor Baratunde Cola and colleagues at the Georgia Institute of Technology (Georgia Tech, Atlanta) convincingly argue that they can achieve 40 percent broad spectrum efficiency (double that of silicon and more even than multi-junction gallium arsenide) at a one-tenth of the cost of conventional solar cells (and with an upper limit of 90 percent efficiency for single wavelength conversion). 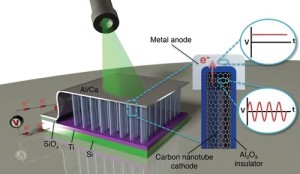 Based on a theory put forth over 50-years ago the rectenna idea was before its time, but now technology has finally caught-up to the concept, which is well suited for mass production, according to Cola. It works by growing fields of carbon nanotubes vertically, the length of which roughly matches the wavelength of the energy source (one micron for solar), capping the carbon nanotubes with an insulating dielectric (aluminum oxide on the tethered end of the nanotube bundles), then growing a low-work function metal (calcium/aluminum) on the dielectric and voila–a rectenna with a two electron-volt potential that collects sunlight and converts it to direct current (DC).

Our process uses three simple steps: grow a large array of nanotube bundles vertically; coat one end with dielectric; then deposit another layer of metal,” Cola told EE Times. “In effect we are using one end of the nanotube as a part of a super-fast metal-insulator-metal tunnel diode, making mass production potentially very inexpensive up to 10-times cheaper than crystalline silicon cells.”

In the past we have covered a few things that interact through serial, from RFID readers to controlling an Arduino’s...