If the material can be scaled up from laboratory samples, devices made from it could surpass traditional electrolytic capacitors for applications in electromagnetic propulsion, electric vehicles and defibrillators. Capacitors often complement batteries in these applications because they can provide large amounts of current quickly.

The new material is composed of a silica sol-gel thin film containing polar groups linked to the silicon atoms and a nanoscale self-assembled monolayer of an octylphosphonic acid, which provides insulating properties. The bilayer structure blocks the injection of electrons into the sol-gel material, providing low leakage current, high breakdown strength and high energy extraction efficiency.

“Sol-gels with organic groups are well known and fatty acids such as phosphonic acids are well known,” noted Joseph Perry, a professor in the School of Chemistry and Biochemistry at the Georgia Institute of Technology. “But to the best of our knowledge, this is the first time these two types of materials have been combined into high-density energy storage devices.”

The research, supported by the Office of Naval Research and the Air Force Office of Scientific Research, was reported July 14 in the journal Advanced Energy Materials. 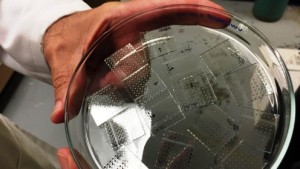 The need for efficient, high-performance materials for electrical energy storage has been growing along with the ever-increasing demand for electrical energy in mobile applications. Dielectric materials can provide fast charge and discharge response, high energy storage, and power conditioning for defense, medical and commercial applications. But it has been challenging to find a single dielectric material able to maximize permittivity, breakdown strength, energy density and energy extraction efficiency.

Perry and colleagues in Georgia Tech’s Center for Organic Photonics and Electronics (COPE) had been working on other capacitor materials to meet these demands, but were not satisfied with the progress. The hybrid sol-gel materials had shown potential for efficient dielectric energy storage because of their high orientational polarization under an electric field, so the group decided to pursue these materials for the new capacitor applications.

Using an aluminized mylar film coated with the hybrid sol-gel capacitor material, they showed that the capacitor could be rolled and re-rolled several times while maintaining high energy density, demonstrating its flexibility. But they were still seeing high current leakage. To address that, they deposited a nanoscale self-assembled monolayer of n-octylphosphonic acid on top of the hybrid sol-gel. Less than a nanometer thick, the monolayer serves as an insulating layer.