A SmartLiving Experiment where using a QR code to control a light in a shop window.

For this experiment we use a Grove LED (representing the shop’s light) and a Smart phone to access the control switch. It’s an ideal starter project to become familiar with the Arduino, Grove and using your a User Interface for web and mobile to control things. 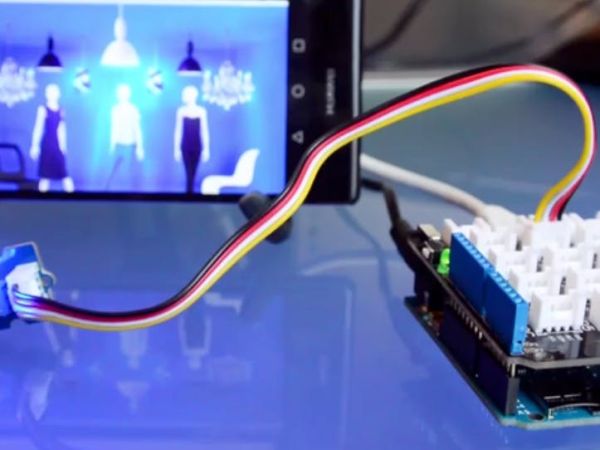 You’ll need basic knowledge how to work with an Arduino, if you’ve never used an Arduino before we suggest the getting started guide.

An Arduino is represented as a device in the SmartLiving Cloud, let’s create a device.

Your Arduino device is now created! Click on the circle on the righthand side of your device to see an overview.

Currently your device has no assets. The assets in this experiment include a LED actautor, which will be created automatically by the sketch when the Arduino starts up.

On the right side of the screen, you will see Device Id, Client Id and Client Key which will be added to your Arduino sketch.

The Device Id is unique for each of your devices, this is used together with your Client Id and Client Key to access and identify your Arduino securely and safely.

Once you’ve updated your Id’s and MAC address you can now validate and run your sketch.

In the setup method, you’ll notice the asset for the LED actuator, these are created with the “Device.AddAsset()” function provided from the library. The SensorName, SensorId, ActuatorName, and ActuatorId are used to define the asset which will be created in the SmartLiving Web App. You don’t need to edit any of these details but, ensure the sensor/actuator Id’s are unique in your sketch.

After the sketch has compiled and uploaded you should now see the assets created under your device in the SmartLiving Web App.

It’s time to test the first part of the experiment.

Click on the Shop Light asset in the SmartLiving Web App.

DSCF2015 This page is dedicated to everybody needs to program a PIC (Microchip) device via USB port. Looking on the...