Normally -according to the Ohm’s law– when the applied voltage is increasing, the current is increasing too, however some components can break this law. When the voltage increases, current decreases. This is called negative resistance. 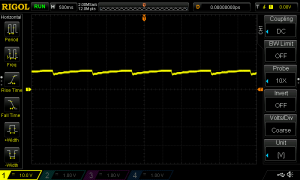 One of the most know element that exhibits this behavior is a tunnel diode. Once very promising, today it isn’t widely used in popular designs and occupies a niche in microwave applications. It’s a bit challenging to get one, fortunately simple circuits that have negative resistance feature can be build from popular discrete elements. One of them I will present today.

The circuit is so called “negistor” – a regular npn transistor connected in a way that the base is not connected at all, and collector-emiter junction is polarized in reverse direction. The generator that uses negative resistance is presented below, and consists of R1, C1 and T1, the voltage when it works is between 9-12V, R2, C2 are used to block DC voltage, D1 is used to indicate if the generator works. T1 works as the negistor.

It’s worth noticing that the tunnel diode works due to a quantum effect called quantum tunelling, I’m not exactly sure if the negistor works also due to it.

Below you can see the voltage on the TP1 (test point), on the first image the scope was is in DC coupled mode, on the second in AC coupled mode.

Other configurations od the oscillators based on the negistors can be found on Alan’s blog.

Everyone believes the future is going to be bright and a lot are betting that smart devices of the future...