Although infrared communication might look like the technology of the 1990s, it is still present in a multitude of applications around us. Every time you press the button of a remote control, it is most likely it is using the IR (infrared) technology for transmitting data. The TV remote is the most common example. Air conditioning remote controls are another good one.

Although a remote control is not so difficult to design and build, there is an even simpler option: the IR barrier. This consists of a constant IR signal permanently going from an emitter to a receiver, both of them being in two different places (a few meters apart). When an obstacle comes in between the emitter and the receiver, the IR signal is blocked and the receiver senses that it is missing, flagging the event in an appropriate manner (figure 1)

The principle of operation is simple enough, and with most components taken off the shelf, it is easy to design the schematic. The IR element in the emitter is a simple IR LED. This behaves absolutely like any other LED, with the sole exception that it emits light in the infrared spectrum. The emitted light is thus invisible to human eye, but it is meant to excite the infrared receiving element on the other side of the barrier. One important element of this LED is the wavelength of the emitted light, of which we already know that is in the infrared spectrum. 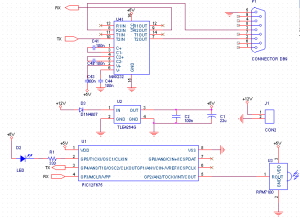 The infrared spectrum itself is pretty wide, starting at about 700nm up to 1mm. It has been subdivided by the International Commission on Illumination in three further bands:

A common wavelength for the LEDs on the market is around 900nm. Any major component distributor (Farnell, Digikey or even Comet – if you live in Eastern Europe) will be able to provide you with infrared LEDs, as they are very common on the market nowadays. 940nm LED is chosen, as it would best match with the sensitivity of the receiver. This IR LED behaves like any other regular LED. So you must bear in mind that the intensity of the light, even if in IR spectrum, will also be dependent on the current intensity flowing through the LED. LED is not directly driven  from the pin of a microcontroller, but through a transistor capable of handling a higher currentand to obtain a range of about 7-8 meters for my barrier. In the figure 2 is shown the simple schematic of the emitter. It is based around a PIC12F675, but the only reason for that is that this is what I had in the drawer. Any general purpose micro will do.

The Bosch BNO055 combines tri-axis accelerometers, gyroscopes, and magnetometers to provide orientation to users. About the Sensor The BNO055 uses...