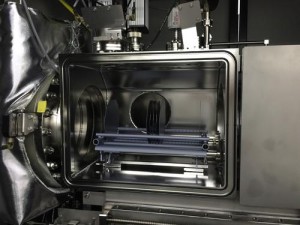 PORTLAND, Oregon — Scientists trying to fulfill the 80-year-old dream of Nobel laureate Eugene Wigner, recently discovered how to place crystalline lattices of pure electrons in the bottom of a silicon-encased quantum well. The resulting material promises electron mobility more than 200 times greater than that of graphene and more than 1,700 times that of crystalline silicon.

So far, the work is still at the level of fundamental physics, but if researchers make the kind of advances they anticipate they could open a door to significant applications in semiconductors.

“We are not ready for apps — only the basic science. We are looking for the quantum Wigner crystal predicted theoretically in 1934 and sought for ever after. With these new samples, we should be able to answer the question ‘yes or no,'” professor Sergey Kravchenko at Northeastern University told EE Times.

“We have the techniques that will allow us to detect this new state of matter. If it exists as Wigner predicted, then one of the most important questions in [what’s known as] condensed-matter physics will have been answered,” he said.

“We are just trying to observe this unique state of matter predicted a long time ago, but never seen in spite of many attempts,” Kravchenko told us.

Describing his work, the researcher noted that there are no atoms in the confinement of the quantum well, only electrons. Thus the research is effectively creating what is called an electron “gas” since particles are normally bouncing around like molecules in a room. However, under the right conditions that electron gas crystalizes into a lattice with an electron mobility of 2.4 million cm2/Vs, compared to 10,0000 cm2/Vs for graphene and 1400 cm2/Vs for silicon.

“Being a 2-D electron gas means the electrons can only move in a plane like billiard balls.  They cannot jump over each other or move in a perpendicular direction,” Kravchenko said. “We created this system in semiconductors that squish the electrons between potential barriers.”

Wigner predicted that such a state of matter was possible back in 1934, 29 years before he received the Novel Prize in 1963 for the discovery of symmetry principles in elementary particles. But it was not until Kravchenko’s team discovered how to do it that the dream was realized. Other contributors to the work came from National Taiwan University and the Institute of Solid-State Physics (Moscow).

Structure of a two-dimensional Wigner crystal with 600 electrons–triangles and squares mark positions of the topological defects. By Arunas.rv
(Source: Wikipedia: Wigner Crystal)

The resulting quantum well “gate” had a near-zero threshold voltage and its conductivity was very sensitive to the temperature of the device. But the team is hopeful that they and others can confirm that they have indeed discovered the coveted Wigner crystal.

Their next step will be to carefully characterize the material by measuring its properties at milli-kelvin temperatures.

There are many potential uses for a material with electron mobility of 2.4 million cm2/Vs. In fact, quantum dots are already being used to brighten the light-emitting diodes (LEDs) in Sony’s XBR X900A series of flat panel televisions, and researchers have already successfully demonstrated in the lab how quantum dots can improve transistors, solar cells and laser diodes.

We all are familiar with the word ‘Automation’, where the human interaction is minimal and things can be controlled automatically...