LEDs are great. But with any project there comes a point where flashing is simply not enough. For these cases an RGB (Red, Green, BLue) LED is the answer.

With an RGB LED you’ll be able to produce any colour glow your heart desires.

At first using an RGB LED seems quite complex, but it quite quickly becomes clear that its no more difficult than controlling one of their single colour counter parts.

What follows is a quick guide to get you started controlling an RGB LED first with wires then with an Arduino microcontroller.

If you’d like to jump ahead to any part here’s your chance. 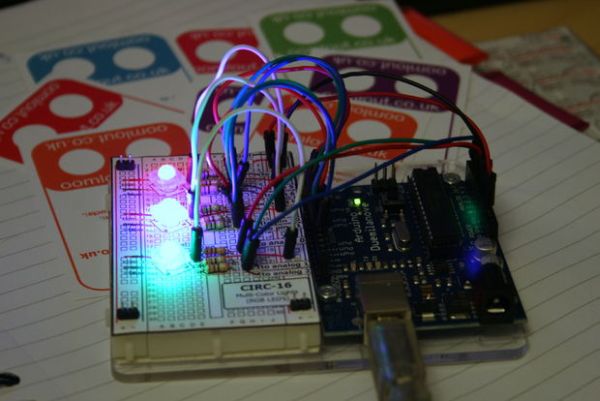 (Shamless Plug)
Interested in getting a few RGB LEDs to play around with and in the UK? a component bundle can be bought at our online store oomlout.co.uk

Only a few parts are required.

Before we connect our RGB LED to our Arduino it’s a good idea to give it a test.

Consult your RGB LEDs datasheet for its pin-out or below are the two most common RGB LED form factors and pin-outs.

Wire up the Test Schematic (below)

Time to move on to controlling your RGB LEDs with an Arduino.

For the example code to follow you’ll need three RGB LEDs and 9 current limiting resistors (avaliable for purchase in the UK from oomlout.co.uk )

Wire up the circuit below.

There are two ways to do this. For the more advanced consult the schematic below.

Or for the less advanced you can download a breadboard layout sheet (the pdf below). Print this out and lay it over your breadboard for convenient component placement.6 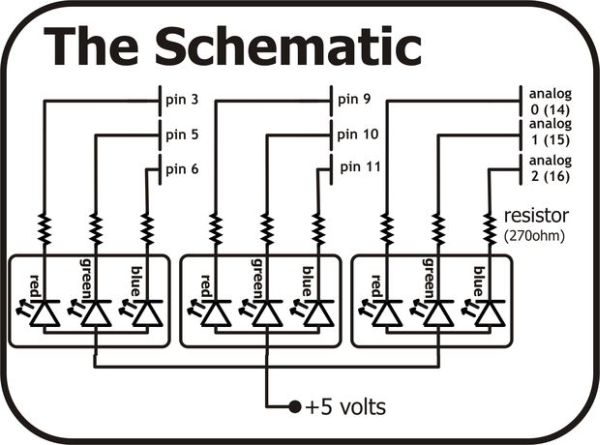 It is possible to control an RGB LED digitally. This requires 3 digital pins for each LED and allows for 7 colours to be displayed (Red, Green, Blue, Yellow, Cyan, Magenta, White).

But don’t take our word for it download the code below and get playing. To do this simply…