There are more than 20 models of LEGO®’s Dune Buggy type car, even more than the models in LEGO® Race Car category.
Dune Buggy is usually four wheels drive off road vehicle,  which would not be used on the road. 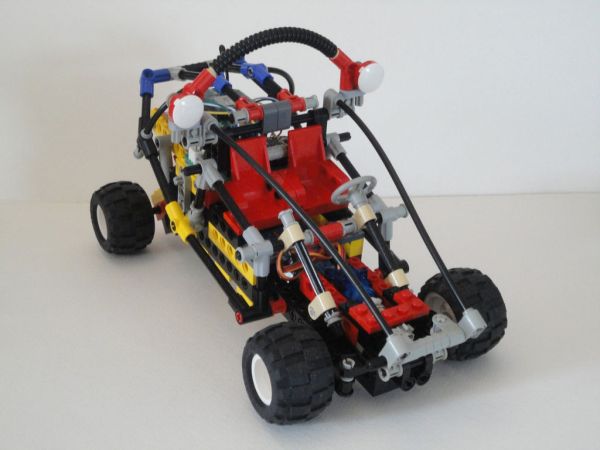 “The Bull” Buggy is larger, and more complicate car to build than my two other LEGO cars, R/C Lego Car (or R/C Lego Car Redux) and Wireless Lego Car. It needed bigger or more power (torque) to drive the car. So I decided to use round 24mm. diameter with 9V input power. That made me to design another version of 3D printed motor housing (See details in Step 1.)

This 3D printed motor housing was designed to be used with the Lego’s parts, and compatible with Lego Modular System just like my smaller version of the motor housing for 130-type DC motor (See Step 1 of my R/C LEGO Car Redux.)

After I built the first “Bull” Buggy, I realized that when I want to access the Palm Arduino and motor controller PCB, I had to tear apart the rear frame to get to PCBs. So I altered the design by adding the hinges to the rear frame so I can just flip the rear roll cage up instead of tear them apart (picture 2 and 3.)

Lego Bricks or parts are already reusable/recyclable products. And it could be passed on to the next generation just like all the Lego parts do. I would say this is the right way to solve the problem and more “green” than hacking toy R/C Motor housing, like I did earlier with R/C Lego Car and Wireless Lego Carprojects.

More photos and video in Step 13.

Disclaimer:
LEGO®, TECHNIC, are property of The LEGO Group of Companies (http://www.lego.com), which does not sponsor, own, authorize or endorse this creation. 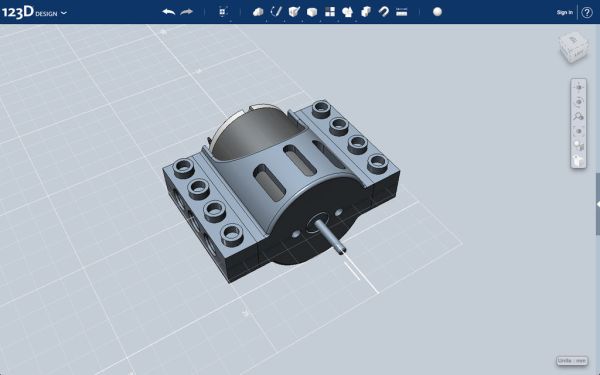 The motor housing was designed to have studs that compatibles with Lego modular system. (4×6 studs.)

Attached is the STL file, you download below. Or in case if you do not have a 3D printer, you can view the model or have it made at Shapeways, here.

It is a good value for the long run. My motor housing for Lego car design can be used over and over, and I do not have to buy toy R/C car to hack for motor housing from it and mod it to fit with my new design Lego car anymore.

Photo 2 I created 1:1 scale 3D model using 123D Design from the manufacturer datasheet. Then saved to my models library.

Photo 3 I inserted the 4-stud LEGO Technic Brick (1:1 scale) that I have in my 3D models library. (Note: I hid the motor for clarity.)

Photo 4 I used The Patterns Tool in 123D Design to create the second Technic 1×4 stud brick.

Photo 8 I added opening by using Combine-Substract tool to the surface for fingers to push in or pull out the motor.

Photo 9 The final 3D model before combining the LEGO Bricks and the housing together.

Photo 10 The final 3D model after combining the LEGO Bricks and the housing together.

Photo 11 The finished 3D model of the motor housing with the motor. Then checked to see if the motor fit into the void area.

Photo 12 I rotated 3D Printed Motor Housing 90 degree to make the model have more strength while the model get print.

Photo 13 I hid the motor model before export to stl format before send the model for printing.

Photo 14 Different view angle (from the bottom) of the 3D model.

Following is the list of Lego Technic parts that I used for building this “The Bull” Buggy.
If you want to do this project you could use the differenct color for the car.

Note: The number in the bracket is the Lego’s Design ID.

Motor
LEGO compatible Motor Housing for Round 24mm dia. 9V motor. (STL file can be downloaded below)
or if you do not have 3D Printer (I wish I have one too!) You could order one from Shapeways, here.)

In this Step, I’m going to show you how to construct the car Steering System.
I also added the description text on each image.

Following is the list of parts used in each step.

In this Step, I’m going to show you how to construct the car Front Bumper and Battery Compartment.

In this Step, I’m going to show you how to construct the car Gear Box.