Well, the “Test PCB” project is finally underway. In case you don’t remember my original blog, the idea is to send a PCB design out to a half-dozen or so low-cost PCB prototype shops, then review their service and quality.

I’ve created a 6 × 6cm double-sided design for this project. I would have made it larger, but at least one fab’s prices (I’m looking at you, OSH Park) rise steeply with board size, and I wanted to keep within budget.

As for CAD, I considered various options: KiCAD, gEDA, Eagle, DesignSpark…perhaps others, but decided to try DipTrace. The free version allows up to 300 pins, and it came recommended by a colleague. In addition, they have an OS X version!

However, it turns out said OS X version is just the Windows version packaged with Wine, and as it didn’t fully function under my older OS (10.6), I decided it was easier to just run the Windows version under VMware rather than try to fix the OS X install. C’est la vie.

Here’s the test board: 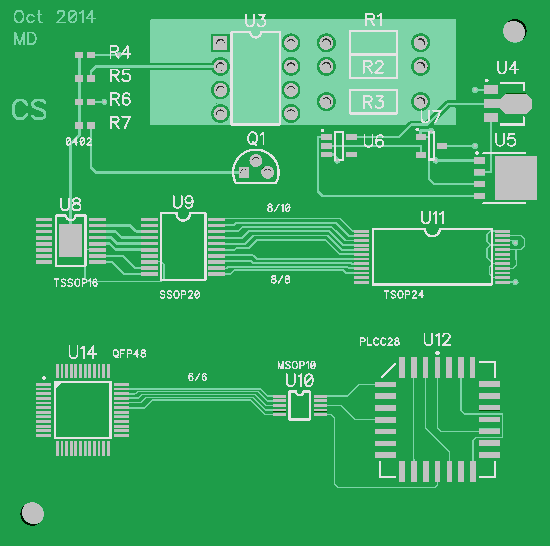 It contains a range of trace widths & spacings, with the test patterns running from 6/6 to 8/10. There are traces near floods, and fine-pitch SMDs to test soldermask registration. The vias and some of the silkscreen legends were made as small as possible, taking into account the various shops’ design rules. There wasn’t that much variation between shops, and some offer different levels of technology at different price levels. I’ll cover all those details in future blogs.