***Disclaimer***This instructable is documentation for a work in progress. Although the project is not yet complete, it has reached a place where I believe it can begin to be beneficial to other makers. 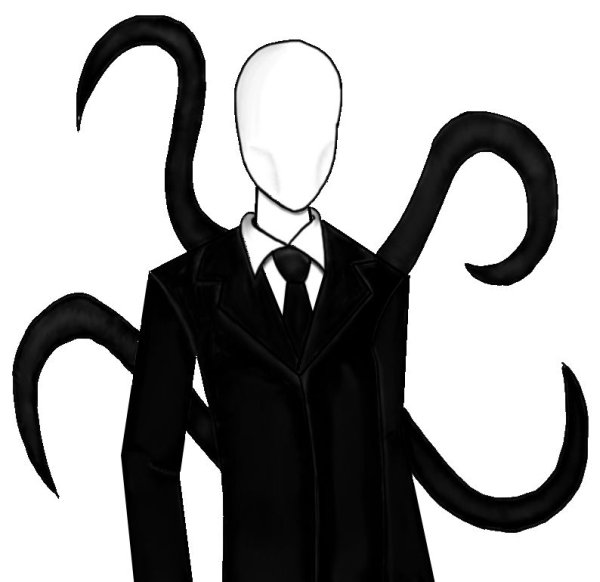 The concept for this project was spawned when a friend suggested I be Slenderman for Halloween. When I first looked at pictures, I wasn’t terribly excited because I am a prop builder more than a costumer, and Slenderman didn’t have any props. However, I then discovered that in some depictions he has tentacle-like appendages emerging from his back. I started scouring the internet, seeing if anyone could give me any advice on how to bring this part of the costume to life. To my dismay, the best I could find was suggestions using armature wire to support the tentacles, but they wouldn’t move so I set out to design my own.

-Be mounted on the back

-Move automatically when not being actively puppeteered

-Have an option to fold tight for moving around tight spaces 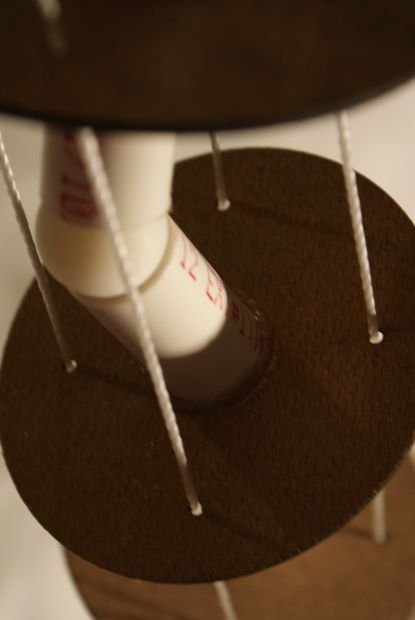 In most cases, small scale is usually the way to start a project. For this, however, it was too hard to visualize how everything would work, so I started work on a single, large scale model. Since there would only be one of these, I decided to try to build a tail that had the same functionality that the future tentacles would have. The idea was to use PVC pipe as the “spine” of the tail, and have laser cut 1/8″ MDF disc’s as the standoff’s to make up the vertebrae.

First, I designed the standoff’s in Corel Draw. The large hole in the middle was for the PVC and the smaller four holes for the control cables. I then printed these pieces on an Epilog Legend Series laser cutter. It took some experimenting to get the sizing right, and in the process I created an unbelievable number of these discs. 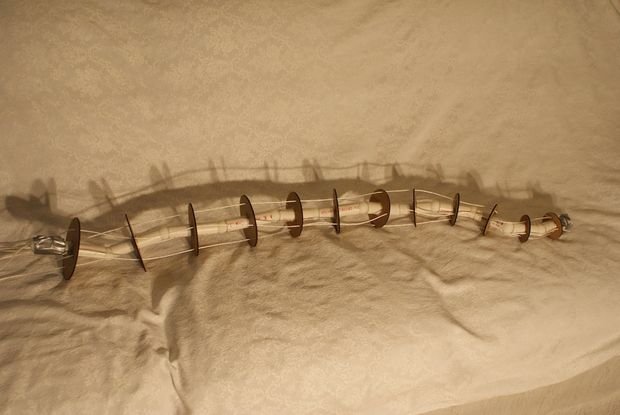 After I had the right size discs, I cut short lengths of PVC to be connected to them, and hot glued the two together. (Hot glue, like duct tape, is a fantastic tool for quick, dirty fixes, but not for robotics. In the final version, I knew I would have to find something a little more precise.)

Next, I had to figure out how to make the PVC vertebrae slide smoothly against each other. I was unable to find any good system for PVC hinges, so I decided to make a ball joint. I made a sphere of approximately the right size in Solidworks, and then 3D printed them into existence. If I were to do this part over, I would have added a hole down the center of each ball before printing them. As it was, I used a drill press and some scrap wood as a jig to drill a hole in each.

I then connected everything down the middle using tent shock cord to keep the tension, and tied/hot glued it off at each end. After running some spare twine down the sides as the control cables, the first draft was complete.

This first “tail” was far from perfect; it was heavy, and didn’t move as it was supposed to.The problem I discovered was that it twisted on itself too much instead of moving directly in the direction it was pulled. This first prototype has been very educational, but it was time to move on to version 2.