Recently I was reviewing one of my oldest project, and decided to “refresh” previous design by taking full advantage of the new arduino Leonardo board.  Based on AtMega32U4, which include PGA (programmable gain amplifier), oscilloscope’s  analog front end doesn’t require external OPA this time, end could be build in 1-2 hours on prototype board, using 5 resistors, 5 capacitors and one IC. Short specification: 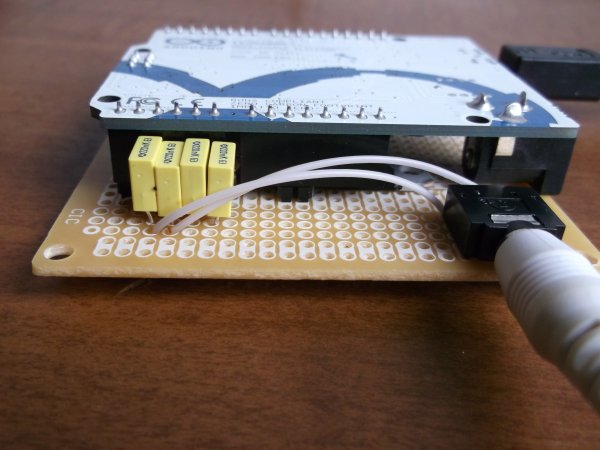 As you can see on drawings above, inputs are AC coupled with caps, and biased with 1.25V generated by LM317. Connector for other two inputs not installed yet.

Project keeps almost same  structure of commands (CLI – command line interface) as its ancestor, with only two new for channel and gain selection. Read comments, it explains how to use them. One more things, I removed “r” – re-print option from the list of available commands.

Well, even posted above sketch has low complexity, and its good for beginning, nevertheless it’s quite limited as measuring device. The most important feature for oscilloscope, except V/div,  is T/div, or timing, that has to be as much precise as possible.   This is why “standard” timing options based on TIMER1 were add to next version of software. There are 9 time settings Time/div (10 samples):

sampling rate. You can choose any of of this in the same manner, entering a digit 1-9 and letter d (display). Zero would skip capture, and just do whatever next letter request. Basically, 0 should be used to print channels data from memory. Combination: 9d0i – capture at 100 kHz rate, print chart and info-table,
4c2g7d – select 4-th channel, set gain to 10, select 20 kHz sampling rate and display.

I also add multichannel sampling capability. Commands 2m, 3m or 4m would configure oscilloscope for 2, 3 or 4 channels simultaneously capturing input waveform.   As arduino has only 1 ADC, switching in multichannel mode would reduce sampling rate proportionally to number of channels, and this changes would be reflected in right top corner of the display. What more, arduino would automatically change vertical resolution per channel, to fit all 2 – 4 charts on one screen!

New updated version. I was thinking how to improve simplest ever oscilloscope, and have made some structural changes in the code, mostly related to sampling in multichannel mode.

First of all, instead of “delay” 2 microseconds, that was used to give a multiplexer (and PGA amplifier) time to “settle” on new channel, I decided not to waste a time (that may be priceless in real-time application), rather start new conversion, than track samples based on the “history” of MUX settings, and store new sample in corresponding two dimensional array box. Now MUX and PGA would have more time,  and consequently I could reduce ADC pre-selector’s clock to get better readings. It solved all the problems with wrong association port number and picture on the screen.

The bar graph - a series of LEDs in a line, such as you see on an audio display -...