in this Instructable I want to show you, how you can program your Arduino with your Android device. It is very simple and cheap. Also it allows us to program our Arduino where ever we want, this is usefull for permanently installed Arduino boards, like in light controllers…

So lets get started! 🙂 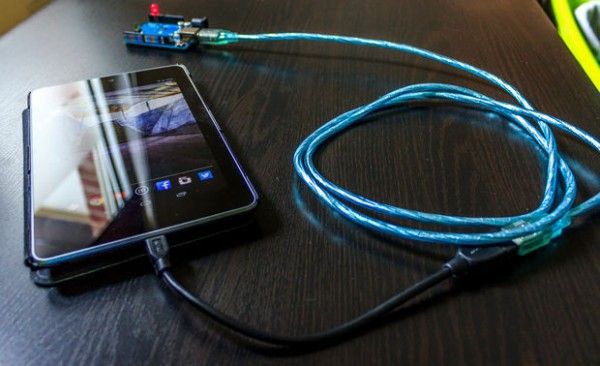 A Android device with Android 4.0.0+ (or with host aviability)

ArduinoCommander from the Google Play store

Such a USB-Host cable is basicaly just a USB cable, but just with a few changed resistors in the mikro USB plug. The internal resistors let the Android device activate the USB-Host mode, in this mode you can also use USB-Sticks or other usb applications on the device. That is very useful, now you could plug a usb-printer in.

The problem is now, that every USB device which you plug in, will now run on the energy of your device, what realy can bring the akku down.

This step is very simple and doesn´t require much text. Just plug the USB-A to USB-B cable into the female USB of the Host cable. Then plug the USB-B plug into the Arduino and the Mikro USB into the Android device.

Now it should look like the connections on the picture. Also your Arduino should now power up and load the last code you uploaded. On my Arduino was the Blink sketch. If it doesn´t power up, check connections.

Now your Arduino is ready to get coded, but your Android device isnt…

Currently there are 2 apps which allow us to work with our Arduino via the Host mode.

Note: We dont need both apps, i just want to show you both! 🙂

For more detail: Program your Arduino with an Android device