Inspired by ‘Back to The Future II’, this project is less ‘Practical’ than ‘Proof of Concept’, but hopefully it’ll tide you over until Nike comes out with something more polished.

This was also the first time I worked with an Arduino microcontroller, and I wanted to get some experience with the little guy.

Operation is quite simple- step into the shoe and a force sensor reads the pressure of your foot and activates two servo motors, which apply tension to the laces, tightening the shoe. A touch switch reverses the servos.

Due to budget constraints, I only modified one shoe. Where did I put that darn sports almanac?! 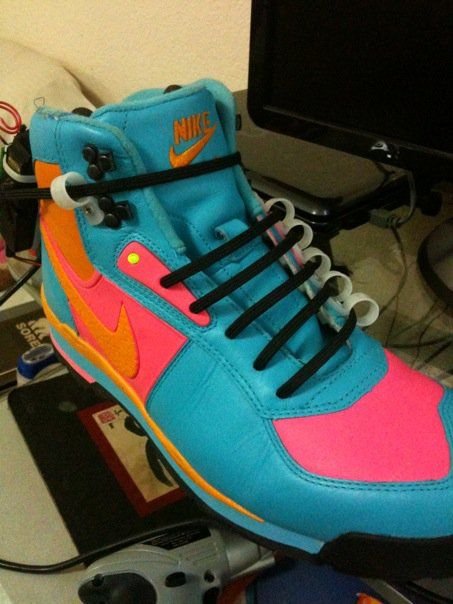 And if you get a chance, vote for me in the Instructable USB contest!

A shoe  // a hightop with a lot of padding and undersole seemed easiest to work with and modify
Arduino  // I used the Duemilanove
Motor shield // The kit from adafruit.com works great, and allows control of multiple types of motors
Force sensor // Also got this from adafruit.com
Servo Motors  // again, also from adafruit.com.  Gotta save on that shipping whenever you can!
Sheet metal // about 4″ x 4″, enough to keep it’s shape but easily trimmed with shears
LED and a couple of resistors  //  I only had  1K’s laying around, so that’s what I used
9 Volt case, with built in battery clip and switch
Insulated copper wire // I used high and medium gauge
Plastic zip ties, various sizes  // I went through a lot of these
Plastic 1/2″ cable loops  // used for organizing cables
1/8″ braided nylon paracord  // 10′ should be enough
Tools:
Just the basics- soldering iron, screwdrivers, etc.  A hot glue gun is handy, too.
Misc:
A USB A to B cable and a computer to load the Sketch to the Arduino.

Cut six lengths of cord, each about 18″ long.  Remove the inner core and save for future projects.

Fit the zip ties into the holes for the shoelaces on one side.  I fit in 5, leaving one space inbetween each zip tie.

Fit the shell of the cord over the zip tie.  Don’t trim the end, as shown in one of the pictures.  Keep in long, as later the end of this will connect to the Servo.

I trimmed the “clipping part” off the zip tie, and then used a lighter to melt the cord down, giving it a cleaner appearance.  If you apply some quick heat to a 1/4″ area at the end here, it will stiffen and prevent the it from coming out (that’s what she said.)

Repeat for the other four.

Screw on the plastic loops and thread through on the other end.

Save the 6th length of outershell cord for later in the project.

The ankle strap is mounted pretty much the same way as the lower laces.  The ankle strap runs the opposite way of the other straps, to put some counter-force on the servos when they put the laces under tension.

I put a small martini shaker into the shoe to act as a foot analog, so I could make strap adjustments and such.  You want to be able to get your foot easily into the shoe, and visually the tightening laces look better if they have a lot of slack. 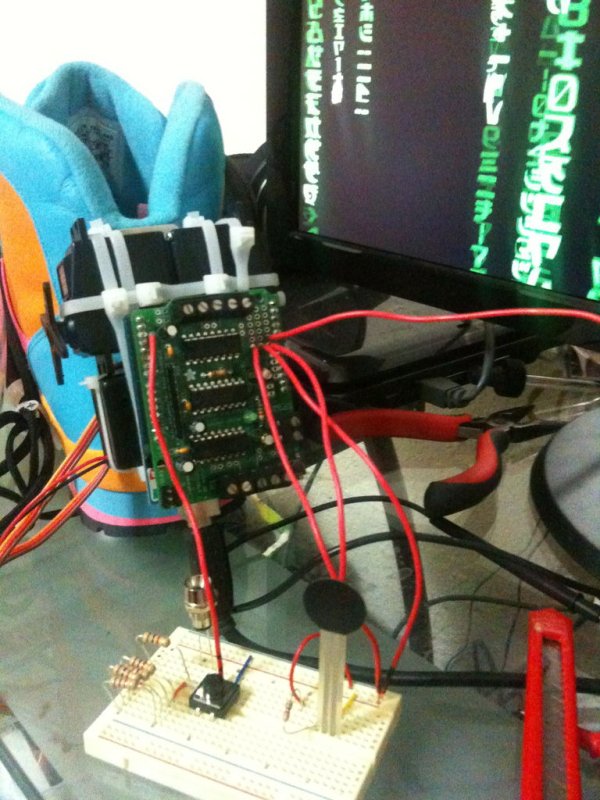 Trim the sheet metal to fit on the back of the shoe.  My pairs have a handy little rubber part at the back and I trimmed the metal to approximate the shape.After sanding down any rough corners and edges, drill in some holes and use some flat bottomed screws to mount the plate to the shoe.  The two screws on the side actually to go into the shoe and are secured with screw nuts, but they’re wide enough apart that I don’t feel them when I put the shoe on.  The bottom screw just goes into the padding.

Leave a bit of a gap between the plate and the shoe for now, as later we’re going to put some zip ties through to attach the servo motors.

The Motor Shield is an addon circuit board that enables the Arduino to control various motors, or Servos in this case.The Shield comes as a kit from Adafruit.com, which has the building instructions along with software libraries that you will need to program and control the Servos.

Following the instructions on the site, solder the Motor Shield together and attach it to the Arduino via the header pins.