The PNP transistor is a mystery to many. But it doesn’t have to be. If you want to design circuits with transistors, it’s really worth knowing about this type of transistor. 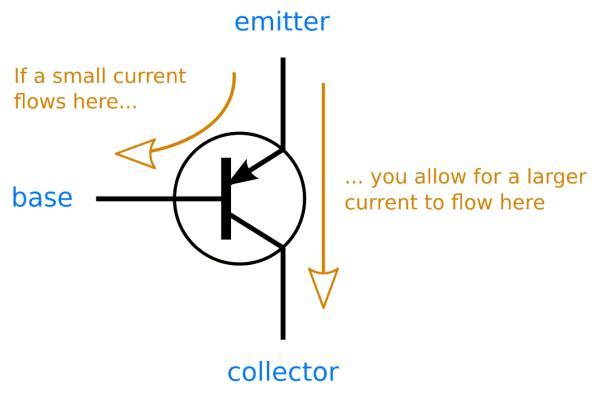 For example: Want to automatically turn on a light when it gets dark? The PNP transistor will make this easy for you.

In my article how transistors work, I explained how a standard NPN transistor works. If you haven’t already, I’d really urge you to read that article first.

Note: This topic is much easier with an understanding of current flow and voltages.

The PNP transistor has the same leg names as the NPN:

By setting the base voltage of a PNP transistor to 0.7V lower than the emitter, you “turn the transistor on” and allow for current to flow from emitter to collector.

I know this can sound a bit confusing, so read on to see how you can design a circuit with the PNP transistor.

Let’s see how to create a simple PNP transistor circuit. With this circuit you can use to turn on an LED when it gets dark.

First of all, to turn on the PNP transistor, you need the voltage on the base to be lower than the emitter. For a simple circuit like this, it’s common to connect the emitter to the plus from your power source. This way, you know what voltage you have on the emitter.

Step 2: What You Want To Control

When the transistor turns on, the current can flow from the emitter to the collector. So, let’s connect what we want to control: An LED. Since an LED should always have a resistor in series with it, let’s add a resistor too.

Read more: PNP Transistor – How Does It Work?