Standard optocoupler speed is limited mainly by the relatively slow response of the phototransistor. This Design Idea adds components to the LED drive side to speed things up.

R1 is the original LED resistor, as used before the extra circuitry was added.

Here however, its value can be higher, as the turn-on speed is determined mainly by the added circuit. You can thus save power, and also drive the LED with a less powerful driver. 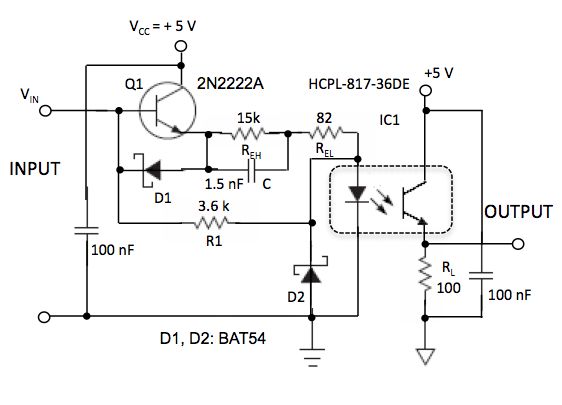 The turn-on speed-up device is an emitter follower, NPN transistor Q1. The emitter follower has its emitter resistor split into a low-value part REL, and a higher-value part REH which is paralleled with capacitor C. At a steep rise of input voltage VIN, the initially uncharged capacitor C temporarily “shorts” REH. Thus, the emitter current flowing through the LED has an increased value of:

Current IE should not exceed 50mA. For a step VIN, the capacitor C charges roughly exponentially with a time constant of τ = RELC. The value of capacitor C had been initially determined using:

where tr0 is the risetime at output of the bare optocoupler.

The obtained value of 13nF results in excessive overshot of output VOUT however. The proper value of C was therefore determined

experimentally to optimally be 1.5nF, which results in a negligible 2% overshoot of VOUT. Schottky diodes D1 & D2 serve for fast discharging of the capacitor C for an input falling-edge, and simultaneously for suppressing reverse bias at the base-emitter junction of Q1 and the LED.