A multidisciplinary engineering team at the University of California, San Diego developed a new nanoparticle-based material for concentrating solar power plants designed to absorb and convert to heat more than 90 percent of the sunlight it captures. The new material can also withstand temperatures greater than 700 degrees Celsius and survive many years outdoors in spite of exposure to air and humidity. Their work, funded by the U.S. Department of Energy’s SunShot program, was published recently in two separate articles in the journal Nano Energy.

By contrast, current solar absorber material functions at lower temperatures and needs to be overhauled almost every year for high temperature operations. 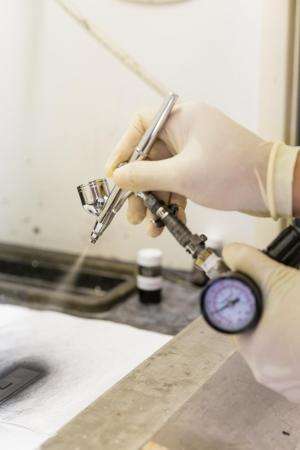 The novel material features a “multiscale” surface created by using particles of many sizes ranging from 10 nanometers to 10 micrometers. The multiscale structures can trap and absorb light which contributes to the material’s high efficiency when operated at higher temperatures.

Concentrating solar power (CSP) is an emerging alternative clean energy market that produces approximately 3.5 gigawatts worth of power at power plants around the globe—enough to power more than 2 million homes, with additional construction in progress to provide as much as 20 gigawatts of power in coming years. One of the technology’s attractions is that it can be used to retrofit existing power plants that use coal or fossil fuels because it uses the same process to generate electricity from steam.

Traditional power plants burn coal or fossil fuels to create heat that evaporates water into steam. The steam turns a giant turbine that generates electricity from spinning magnets and conductor wire coils. CSP power plants create the steam needed to turn the turbine by using sunlight to heat molten salt. The molten salt can also be stored in thermal storage tanks overnight where it can continue to generate steam and electricity, 24 hours a day if desired, a significant advantage over photovoltaic systems that stop producing energy with the sunset.
For more detail: New solar power material converts 90 percent of captured light into heat