NES in a Cartridge using Arduino

Have your ever seen any of “Ben Hecks” portable console builds? Well if you haven’t, he often uses these Chinese Famicom clone consoles. These cloned consoles are often times refered to as NOAC’s, meaning NES On A Chip. They are called this because they are a fully functional Nintendo Entertainment System literally on one chip. The best part about the NOAC is that they include a 60 pin famicom game port, which in our case can easily be converted over to a 72 pin NES game port. 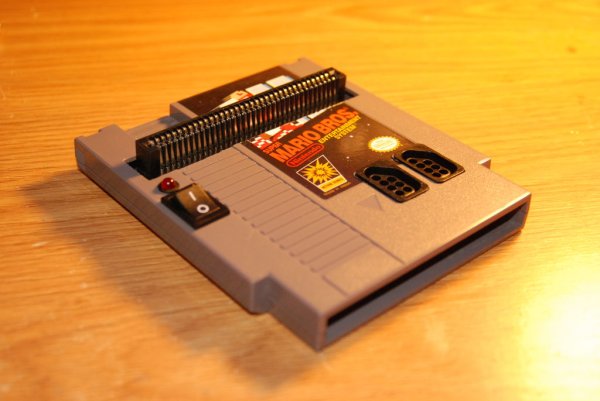 One of the toughest things to find is the Chinese Power player unit (or Super joy thingy), which ever system you find, they all should work about the same. I was lucky enough to find mine at good will for 6 bucks… can’t beat that. Any ways, if you can’t find one locally then check on ebay. The only problem is that if you buy one off ebay then it will run you around 20 bucks. All the rest of the stuff you can get either from Radioshack, or once again on ebay. In my case I bought the 72 pin connector and the ports separate, however you would probably be better off just buying a broken NES. My only problem was that I was kinda pressed for time, and couldn’t find one FOR CHEAP!!!!

1. Power Player Unit (or similar)
2. NES 72 pin connector
3. 2 NES controller ports
4. An NES game that will serve as the case
5. An atmega168 (arduino chip)
6. Texas Instrument TLC5940 (you can get these as samples from their site… their free)
7. Some basic parts such as switches, leds, along with a 7805 voltage regulator
8. PCB making stuff (I used the toner transfer method)
9. Basic knowledge of soldering and electronics
10. And most definitely a dremel tool with some bits and cut off discs
11. A multimeter is probably a good idea as well, because you will need it for troubleshooting

After you’ve played around a little with your Power Player, and got a kick out of some of the things they’ve put on it….. sadly it is time to take it apart. Hopefully it won’t be too long until you will being playing games on it once again though.
So once its all apart, start off by locating where the power inputs are. Something that I like to do is to take a picture of the board (or scan), and put it into photoshop and color in the traces according to their use. It’s a helpful tip that I like doing, because sometimes when your cutting up a board, you will forget what things went where and things just get crazy.
Once you’ve found the power connections, I would test to see what voltage the unit runs one. Most commonly it’s going to be 5 volts, but just check to make sure. In my case the wall adapter was ouputing 13 volts, but there was a 5 volt regulating circuit on the controller PCB.
The next thing you want to check on, is there or not the player buttons have a common connection. Most of the time they will use ground as the common, but I’ve seen others. In my case it was ground, which works out perfectly because the TLC5940 outputs only grounded signals to achieve PWM.

For more detail: NES in a Cartridge using Arduino

Dear Adafruit, Sparkfun, Radioshack, and hobbyist companies of the like, I'm a high-schooler with zero dollars in the bank. I...