There is something fascinating about watching an autonomous machine. An automatic car wash, a soda vending machine that picks up the product behind a window, a plotter, or a robot like a CNC or 3D printer are all interesting to watch. Although [EngineerDog] bills Mug-O-Matic as a tiny CNC, we think it is more of a plotter for coffee mugs. It’s still fun to watch though, as you can see in the video below. 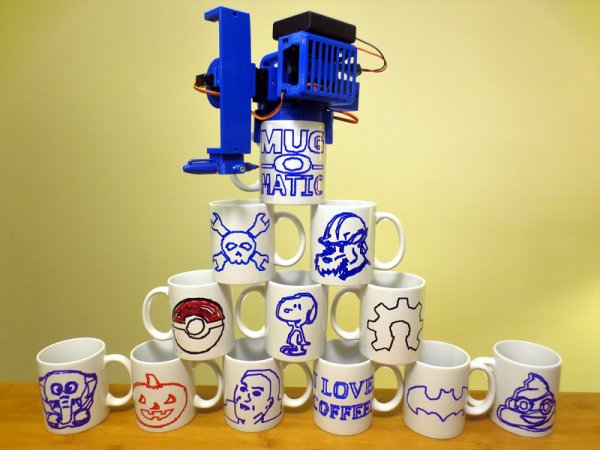 The design has about 60 printed parts and uses a Sharpie at the business end. It accepts gcode and can even emblazon your favorite mug with our own Jolly Wrencher, so you know we like it.

Of course, a Sharpie mark won’t stay on a mug forever, but the write up says you can bake the mug to make the markings permanent. At first, the project used a cheap Arduino Nano breakout board. However, that was set up to drive the servos with the Arduino’s power supply, so instead of board surgery there is now a custom PCB.

The resulting drawings are a little shaky, we aren’t sure if that’s from the way the device mounts on top of the mug or just the lever arm of the carriage the pen rides in. However, for a fun project it does a great job.

We couldn’t help but think about eggbots and the spherebot when we saw this. We also wondered if this could draw on glass that would later be etched with hydrofluoric acid or  Armour Etch.

Massimo Banzi, co-founder of Arduino, introduced the new Arduino approach to reducing the complexity of building a LoRA network. Connect...