Make your own smart watch

Most IT companies participate in the race to grab people’s wrist. A smart watch becomes the most significant item in a wearable device category. You can easily find this mood in this link, there are tons of smart watches. 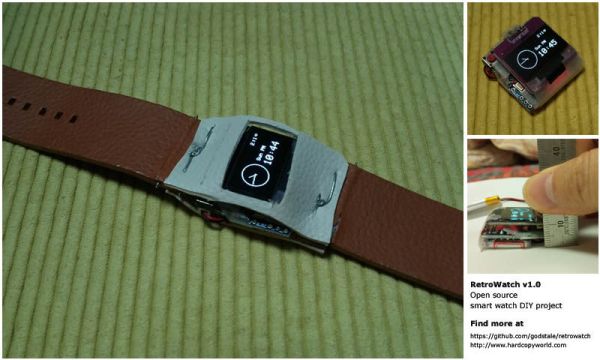 But here is a simple way to evaluate smart watch’s future on your own. Make it! With Arduino micro-processor and Android, I made a simple smart watch and named it “Retro Watch“. You can do this too!

Retro Watch is an open source project to let you make a smart watch based on Arduino and Android. This text explains about modules, blueprints, how to install and use the Arduino and the Android source codes step by step.

RetroWatch is a simple system that is used a hardware platform called Arduino, which is intended for artists, designers, and hobbyst, and an Android app. The overall structure is in the picture above.

Imagine a very small computer that you can wear on your wrist. Arduino board is a micro-processor and a storage, and there’s only one input method : a button. Bluetooth is to communicate with other devices, and the battery would be necessary for power. I’ll install an Android app for collecting or editing various RSS and system information and for notification on the Android device.

You need to prepare modules as small as possible to wear the watch on your wrist. There may be tons of variations, but I chose parts that are commonly used and inexpensive.

I chose the smallest Arduino, Pro mini. Arduino Pro mini is a light version of UNO R3. It doesn’t have a USB interface chip in order to reduce the price and the size. There are two version depending on the operating voltage(3.3v/5v). And I used a 3.3v version, because the bluetooth and display that are connected with the board support 3.3v and the board goes well with the 3.7v LiPo battery. It runs at 8MHz and a 5v version at 16MHz, but 8MHz is enough. Overall, all you need to prepare are Arduino Pro Mini 3.3v and USB to UART module.

The main chip of the board, ATmega328, has only 2KBytes RAM, but ATmega128 has just 1KBytes, which is very limited to run my system. Most boards have ATmega328, but you have to make sure.

One of most common bluetooth modules that you can get are HC-06 main module and the one with interface base board. The latter one has a reset button, the status LED, and it supports both operation voltage(3,3v/5v), so this one is more convenient but the size is rather big, the LED, which is not quite necessary drains the battery and a little more expensive. So I used a HC-06 without the interface board.

Display
To make a SMART WATCH, it would be necessary to find a small, low-power display. I’d given lots of thoughts, then I chose -.96’’ OLED Display. There are various sizes of the displays(0.96’’, 1.3’’, etc), it works on low-power, English font and the image out available, and it supports I2C, SPI, which makes easy to connect with Arduino.

For more detail: Make your own smart watch

An Arduino is an open-source microcontroller development board. In plain English, you can use the Arduino to read sensors and...