How to Make an LED Scrollbar

In this tutorial, we are going to build an LED Scroll Bar as shown in the image given below. The project is designed to flash Ten LED strips ( by giving different lighting patterns for each strip) with the help of a control board. 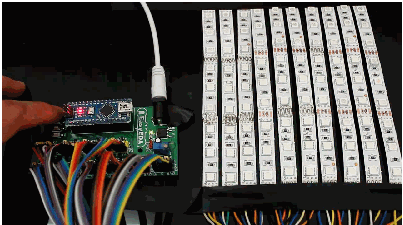 We have created a simple GIF animation of the project to give you a good idea of what we are going to build. So here take a look at the animation of working model of LED Scroll Bar using strips.

o this is what we are going to build! And lets begin to learn – How to make an LED Scroll Bar.

Components Required are listed below:

LED strip, Arduino Nano, Dupont line and a control board.

Components are explained in images given below.

How to Make LED Scroll Bar?

Cut the LEDstrip into 10pieces with each LED arbitrary number.Then, weld the traverse at an interface of the LED strip. Here I prefer using Dupont line to connect.

Use a free tool like EasyEDA, – which is a free EDA tool suite. It includes Schematic Editor, PCB layout, it has integrated a large number of component libraries, so you can feel easy to find the desired parts.

The Schematic is shown in the picture below.

Read More: How to Make an LED Scrollbar

This is a magic box which will let you monitor the power consumption of your house from anywhere on the...