In this project we make electronic dice.

In this article you can learn how to make an electronic die (die is the singular of dice), using an ATmega328 with Arduino bootloader and a few inexpensive components. The reason for doing this is to introduce another object that you can build, learn from and be proud of. It is a fairly simple procedure, and at the end you will have something that is useful for a long time to come. Again this article will be a design-narrative, so please read it in full before making a die yourself.

First of all, here is a photo of my finished product. 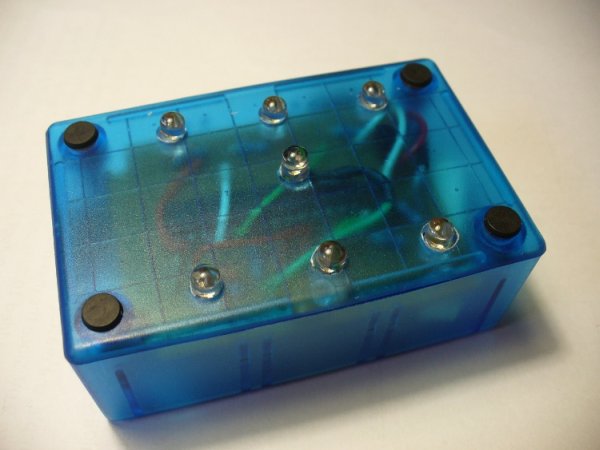 Naturally the cosmetic design is up to you, I have used this box, LEDs and switches as they were already in my stock of parts.

The die is quite a simple design – with a twist. Inside the unit is a mercury switch. This consists of a small glass tube with two wires at one end and a small amount of mercury. When the mercury rolls over the wires, they are shorted out. Just like a push button when it is pushed, for example:

We will make use of this switch to start the die “rolling” – to simulate the use of a non-electronic, under-engineered wooden die. For safety, I will be using a mercury switch that is enclosed with plastic:

Over the last few years several people have contacted me saying “don’t use mercury switches”. Fair enough, if you don’t want to either, use element-14  part number 540614.

First of all, the circuit is assembled on a breadboard using our Eleven Arduino-compatible board. There is no need to build the complete independent circuit yet, as we just want to test the aspects of the sketch, and try various LEDs out. I have some bright blue ones which match with the blue housing:

Project Code and other data:

There is a function in the sketch (below) called

The sketch is quite simple – you can download it from here.

Once the behaviour of the die met my expectation, I used my ZIF-socket programming board to upload the sketch into a nice fresh ATmega328 with bootloader. One could also add a piezo buzzer for sound effects, as described in sketch. This will end up being a birthday present for a young niece, so I have omitted the sound effects.

Control the position of a RC (hobby) servo motor with your Arduino and a potentiometer. This example makes use of...