I was looking at a low cost way to build a 10Mhz frequency for my electronics lab. I had a few options that I could pursue, these were…

So to make a choice on what I should use I had to come up with design parameters for my frequency standard, these were as follows.

The preceding criteria ruled out a GPSDO as that requires an antenna that has a view of the GPS satellites, this would be ok at home but I didn’t want to have to make sure I had a outside view of satellites if I was taking it to someone else’s shack or like the club shack with no windows this would have been impossible to get a GPS lock.
I next looked at atomic standards. The Caesium standards were out of the question due to the cost, second hand you could expect to pay upwards of USD$5000 for one, certainly not low cost by any measure. The rubidium standards were a lot cheaper at around USD$200 so that was an option. This raised the question, did I need the accuracy of a Rubidium or could I get away with a cheaper option ?
This led me to investigate OCXO’s to see if they would suit my needs. First was to see if they met my stability requirements. A typical 10Mhz OCXO has a stability of 5×10-10 This is ±5 mHz drift per second on a 10Mhz signal, well within my requirement of 0.5hz over 2 minutes. The reason I need this stability is for WSPR digital which requires a very stable clock signal. 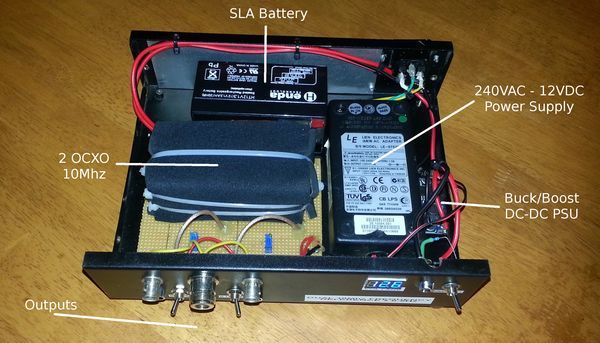 What about the cost of an OCXO ? Well a quick search of eBay led me to a Double Oven OCXO from a Russian company called Morion. I could get a second hand unit for less than $40 delivered. This particular unit listed stability of better than 2×10-12 over 1 second which is 0.005 mHz and stability of ±5×10-10 per day at 10Mhz. These figures were well within my requirement’s so I ordered two units from eBay.

I now started to put some thought in to the design and construction of the complete unit and what I would need.

I had an old car computer case that I could use for the project so I ripped out the old motherboard and found some rubber feet in my junk box to put on it, this gave me an idea of the size case I had to work with so I grabbed a ruler and measured it up to see if the OXCO would fit. It would fit with heaps of room for an internal 240 to 12 VDC power supply and a battery.
I was thinking about the power requirements for the unit and how I was going to power it. I needed about 1.5 amps for the oven while it is warming up with that dropping to about .5 amps once warm. Wrapping the oven in insulation should drop that even lower. I had an old 4 amp 12VDC power supply from a computer monitor that I could use so I dug that out as well.
At this stage I put the project aside for a couple of weeks while I waited for the OXCO’s to arrive in the post. When they had arrived I put one in the case with the power supply and soon realised I actually had the space for both of the OCXO’s.