The original idea was to create a library that simplify the use of IC 74HC595 between Arduino and other hardware. In this Instructable I will share this to you using as example the control of a 16×2 LCD.
The example will show on the LCD the seconds that has passed since Arduino was restarted. 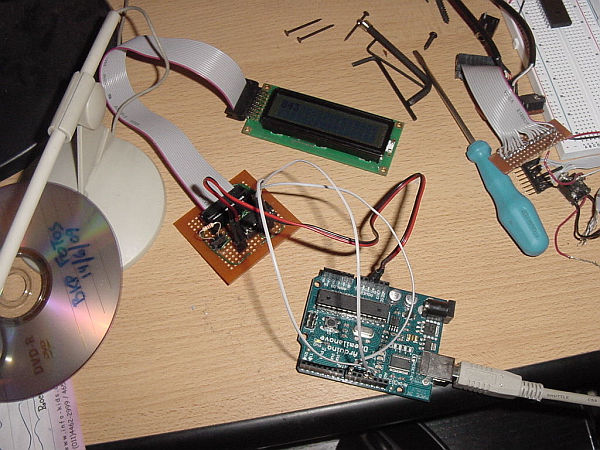 I hope it will be useful to you.

I’ve named the library “ShiftOut”. It goes under %arduino-directory%/hardware/librariesThis one is the library that I’ve programmed. Comments are welcome.

The second library needed is the one that communicate to the LCD. I’ve used this one and not the one that came with Arduino because it’s an initialisation bug.It’s based on www.slashdev.ca/arduino-lcd-library/ and has the necessary changes to integrate the ShiftOut Library that I made.

This must be uncompressed under %arduino-directory%/hardware/libraries too.

This simple sketch shows on the LCD the seconds that has passed since Arduino was restarted.

It’s important that the libraries are copied before Arduino IDE is open. Otherwise the compilation could fail.

If everything was OK, you could connect Arduino to a 74HC595 and this one to a LCD following the schematic images diagrammed using Fritzing.