The LASER Maze was our Processing and Arduino powered garage haunted house for 2011. A monitor sits outside of the garage, displaying “PRESS START.” After the button is pressed, an intro video plays that instructs you to dodge the lasers and get your candy in the back of the garage. Whenever you break a laser beam, an alarm sounds, a police light flashes, and a point is added to your score. When you make it back out, you press the stop button to see your final time and score. 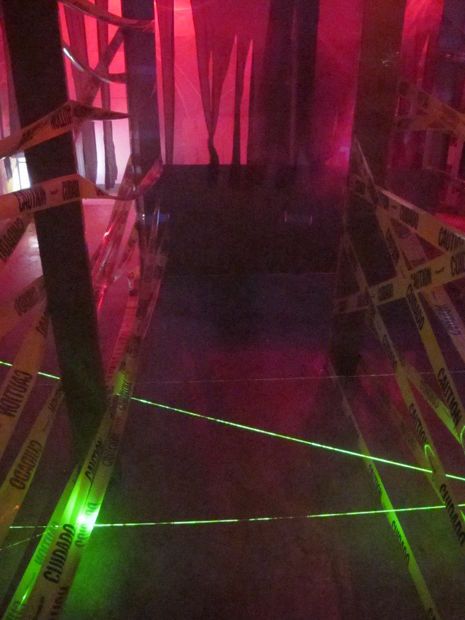 We kept all of the lasers very low to the ground to avoid everyone’s eyes. Future versions may turn the lasers off for a short time when they are broken for an added layer of safety.

We also made a couple of flashing signs out of red and white blinking bicycle lights. The house is at the end of a cul-de-sac, so we had to advertise to attract more attention.

Here is Alice in Wonderland with her pirate and gremlin friends navigating the maze.

You will also need electrical tape, cardboard TP tubes, soldering iron with soldier, velum paper or some other semi transparent paper, and possibly some other small items.

Step 2: Overview – How it all Works

he 4 green lasers are lined along one side of the garage, all wired in parallel to 3 D cell batteries. They are not connected to the Arduino in any way. On the opposite side of the garage, there are 4 CDS cells(Light Dependent Resisters) inside of cardboard tubes. The CDS cells detect the laser light, and the tube helps filter out other unwanted light from strobe lights.

The Arduino is programmed to watch the CDS cells, and the stop, start, and reset buttons. The Arduino sends 4 signals back to the Processing code on the laptop: start, stop, alarm, or reset. The Arduino also powers a servo that turns on a spinning red light when the alarm is set off.

The music playing in the background is just shuffling on the computer, it is not connected to Processing or Arduino.

The garage was laid out so that guests would have to cross the laser beams as many times as possible. Only 4 laser pointers were used, but the trick-or-treaters had to dodge laser beams 16 times.

The yellow lines in the picture show where we built cardboard or caution tape walls. The caution tape made a clear path for people while still allowing the lasers to pass through to the sensors on the opposite wall. 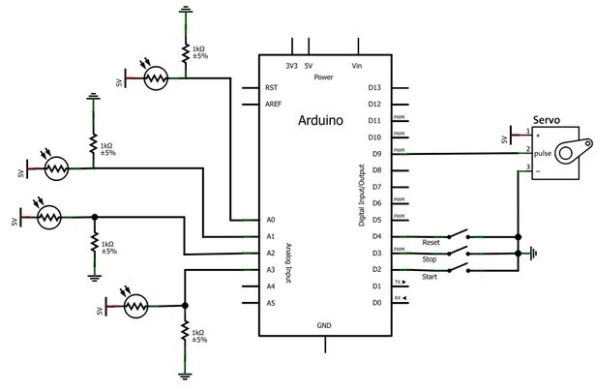 The air mask in the picture is an air compressor with a blower attachment pointing through the mouth of a skull mask. The blower handle was tied to a string and run through some pulleys so we could scare kids from a distance while they collected their candy.

The Processing code accepts 4 serial commands from the Arduino, and displays the state of the game on the monitor based on those commands. The basic flow of the program through the 5 states is:
For more detail: LASER Maze – Halloween Haunted House
Share this: