Joule Thief” – no IC and no Transformer

Posted date: October 12, 2015 In: Electronics News Updates | Tags: no ic and no transformer

Yep, no transformer and no hard to get IC. But, … two transistors and other parts are required. I actually found this circuit by accident while roaming Colin Mitchell’s Talking Electronics website (talkingelectronics.com). 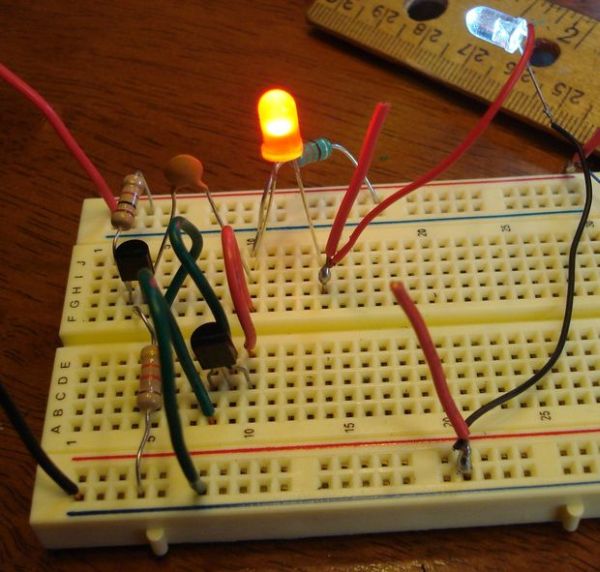 This website is very rich with examples and explanations of a huge variety of circuits. In fact, this website is so abundant in circuits that later on, I couldn’t find the circuit revealed here. Anyhow, I believe that the TE circuit can be considered “robust” as it works even if different parts are used.

And now, I recently had a reader has ask me where I could put a photoresistor in the two transistor “joule thief” circuit to make the circuit turn off in light and turn on in darkness. I really didn’t know but wired a photoresistor between the B plus and the base of the PNP transistor, Q1 (see first schematic below). This sort of worked but light didn’t always shut of the LED – not good enough. I then added another transistor to turn on and off the circuit, where this transistor is controlled by the CsS Radio Shack style photocell and a 10k ohm pot (old volume control). This seemed to work fine as the light/dark trip point could be easily adjusted by the pot (see second schematic below)…

For more detail: Joule Thief” – no IC and no Transformer

Does a universal signal relay exist?

Signal relay is almost an „ideal component“ thanks to a practically zero distortion and a total isolation of a switched...