Analog Devices is aiming to win designs in both high end and low power portable systems with its latest 8-channel ultrasound receivers.

The company’s moved to a silicon germanium (SiGe) process technology to achieve the necessary combination of performance and low power in its latest generation of ultrasound receivers. 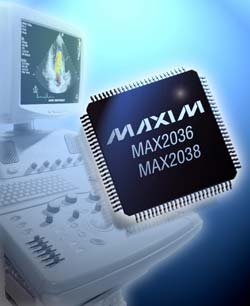 The company introduced its first integrated receiver three years ago, but these devices are the first to use SiGe process technology which provides an output-referred large-signal SNR of up to 67dB for use in high sensitivity systems.

The receivers feature a variable gain range of 45dB, a fully differential signal path, an active input preamplifier termination, a maximum gain of up to 52dB, and an ADC (analogue-to-digital converter) with a conversion rate of up to 80Msample/s.

In CW mode, the AD9278 is tuned for low power portable applications and has a power consumption of 25mW per channel.

In data conversion mode, the AD9278 consumes only 88 mW per channel at 40Msample/s.

For high-end systems, the AD9279 offers a highly configurable LNA featuring low input-referred noise density of 0.67nV/?Hz. Its power consumption is 139mW per channel at 40Msample/s.

Fujitsu Laboratories Ltd. today announced the development of a receiver circuit capable of receiving communications at 56 Gbps. This marks...